Three parents – two lawyers and a bank executive – are definitely happy during Christmas as their
children reaped medals, some golds, in the biggest college sports organization in the country – the University Athletics Association of the Philippines. Jherzon Sebastian – father of the region’s only female national master Mhage – could be the happiest with his daughter not just leading the Far Eastern University – Diliman Baby Tamaraws female chess team to the top podium but also
winning the most valuable player plum in board one.

The FEU – Diliman team captain had a sterling 2022 that included representing the country in the World Junior Chess Championship in Sicily, Italy in October of last year where she finished at the middle of the 64 player 20-under women’s competition. The father was also the first coach and writes tge story of the young chess master’s feat. He used to be a Bombo Radyo reporter and a University of the Philippines Baguio journalism graduate who last year oassed the bar exams.

Meanwhile, Baguio born and raised Pag-ibig de Villa fulfilled her dream of winning the gold medal in women’s judo in the UAAP. The fifth year University of the Philippines creative writing student postponed finishing her studies just to get the gold medal after winning a bronze in the individual competition and gold in team events during her first year in 2018. She missed three years of
competition due to the pandemic but came back strong to rule the under 71 kilogram side.

She is the daughter of banker James de Villa and Insular Life’s Marilen, herself a UP – Baguio graduate all the way from high school. In taekwondo kruyogi, Rama Liporada, also Baguio born and raised, finished second for the University of Santo Tomas in the under 58 kg division on his rookie year. The son of a city legal officer Isagani Liporada came off from a leg injury and still managed to get to the finals of the toughest collegiate competitions in the country.

In his Facebook wall, the elder Liporada, a former member of the Baguio Colleges Foundation (now University of the Cordilleras) basketball team, wrote: “Thank you, Father God, in Jesus’s name for healing Rama’s leg.” The elder Liporada, at six feet flat, used his height to pay basketball for free education and has seen his four children join top schools in Manila as athletes and had or now
enjoying scholarships as well as allowances, free board and lodging and free gears. The father was a member of the Baguio media, a writer for the definct City Digest and later at the Public Information
Office – Baguio. 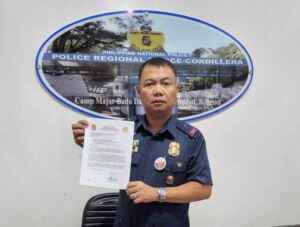