BENECO INTERIM BOARD OF DIRECTORS OATH-TAKING

The five members of the Task Force BENECO who will serve as Interim Board of Directors of the Benguet Electric Cooperative take their oath today, Jan. 11, 2023 before National Electrification Administrator Antonio Mariano C. Almeda. They are Joaquin Gerenimo Depalog Jr., Elma Donaal, Steve Cating, George Dumawing and Rodolfo De Guia representing the various sectors such as the business, academe/education, consumer/professional, agricultural and religious sectors.

This after the NEA through its Board of Administrators (NEA BOA) issued a decision ordering the removal of BENECO’s Board of Directors based on findings of long-standing irregularities in the management of BENECO. The task force will serve for six months and within said period will work on installing BENECO network systems manager Ramel Rifani as acting general manager and call for the election of the district representatives who will comprise the regular BOD and appointment of the regular general manager. 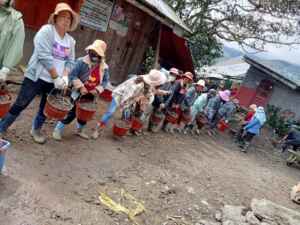