BAGUIO CITY — Bangued, Abra mayoralty bet Mary Ann Bersamin, niece of former Supreme Court Justice Lucas Bersamin, is seeking the relief of police officials detailed in Abra claiming “they are doing nothing on the rampant vote-buying (in the town center).
Bersamin accused the police of giving protection to politicians who are reportedly buying votes.
She said that she has talked to the chief of police in Bangued and they agreed that police should disperse the people lining up at the houses of Barangay captains, where P3,000 is allegedly being given in exchange for votes for their opponents. “I am calling on the police here in Abra, I hope that you will be replaced,” Bersamin said over the phone.
The mayoralty race in Bangued is a three-cornered fight among Bersamin, former mayor Ryan Luna and incumbent vice mayor Mila Valera. Valera is the wife of incumbent mayor Dominic Valera who is running for governor and mother of incumbent Abra governor Jocelyn Bernos who is running for vice-governor.
Three days ago, vice mayor bet Buc Luna, son of former Abra lawmaker Cecille Luna went live on FB with over 78,000 viewers about a supposed vote-buying activity happening right at the barangay Angad, Bangued chairman’s house. He also claimed policemen and soldiers present in the area did nothing.
Abra police director Col. Maly Cula however parried off such accusations saying the cops were deployed in the area to thwart any violence that might have erupted in the area because mayoralty bet Ryan Luna, also a former Bangued mayor, and his camp, were also present there.
It is within the Comelec’s ambit of power, said Col. Cula, to check on the alleged vote-buying activities. “Policemen were in the area to maintain peace and order,” Cula ascertained. The police official also said a police investigation found no evidence of the alleged vote-buying sprees of the Valeras in Angad, Bangued.
Bersamin, who furiously complained of vote-buying in the capital town vowed to consult with her lawyers for possible filing of an election complaint.
Artemio A. Dumlao/ABN 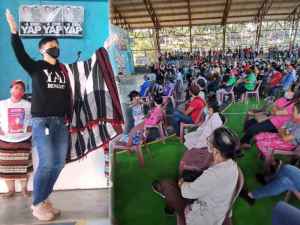