With arts as a medium to promote the province’s culture and ecology, this year’s Pagwanawanan is a month long festivity that was launched yesterday, Friday, with theatre performances from Dulaang Elyu and musical child talents from the province, once the favorite summer destination in northern Luzon.

The morning performances were staged at the Urbiz Garden while three indigenous peoples took the stage in the afternoon.

Also having its premiere on day one is the ridge reef recyclers market, a weekend community market “which highlights La Union’s ‘One Town, One Product’ selections.”

The event organizer La Union Convention and Visitors Bureau invites people to “come and witness the Art Trade by the United Artists of La Union and the She Sells by the Seashore from selected women crafters of the province, and check out the beach portrait demos and upcycling demonstrations.”

The community market runs for two weeks, this weekend and next.

A film festival at the Puon Art Design Library in nearby San Fernando will have narrative, documentary, animated and experimental films produced by talents from around the Philippines.

The two-day filmfest will also be showing an indie film feature by Petersen Vargas entitled “2 Cool 2 Be 4Gotten.”

A series of ARTreach programs that “are formulated and given out to four selected public senior high institutions in the different municipalities of the province of La Union” will continue this weekend until October 5.

The ARTreach, which was launched last Sept. 7, organizers say “aims to further foster the knowledge and art appreciation of the younger generation in order to shape and equip them as they become the future guardians of La Union’s culture and arts.”

Manila bands and guest artists from Baguio will join local talents on Sept. 29 for the music festival. The event starts at 3pm until the curfew time of 9pm to ensure “that music is lessened to make way for Pawikan nesting season.”

Also running is the Pagwanawanan Exhibit & ArtTrade at the Kahuna, Da-luyon Art Cafe, 134 Beachfront Gallery at Urbiz Garden which will culminate on October 15.

The Pagwanawanan fest, said the LUCVB, “signals the start of a new nesting season through a series of low-impact pocket events that seeks to bring various communities together, using their talents in music, art, crafts, as a medium to educate both locals and tourists of our ecology and culture.”

Pagwanawanan is an Ilocano term meaning to watch, stronghold or locally baluarte. Historically, watch towers have been constructed at the coasts to “warn people of impending danger from the seas essentially making our ancestors guardians of the people.”

This year, organizers say, “we’d like to remind everyone to become guardians of a province that although small, is home to one of the world’s most important creatures – Olive Ridley Sea Turtles (locally known as pawikan).”

The LUCVB adds, “These sea turtles nest on the shores of La Union and are considered keystone species that ensure the jellyfish population is controlled making our beaches safe to swim in and keep our reefs viable for fishes to lay eggs.” PML / ABN 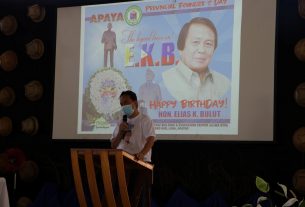