Benguet culture lives on through Adivay

LA TRINIDAD, Benguet- Representative Eric Yap together with provincial and local government units
(LGU) officials, vowed to sustain development projects, leading to progress and prosperity of the province.
By doing so, Rep. Yap sougth the cooperation of everyone from the 13 municipalities of the province.
Likewise, he humbly appealed for patience and understanding for projects that has yet to be addressed.

Yap led other Benguet officials in the Grand Canao activity , highlighting 122nd Adivay Festival celebration
which after two-years, drew thousands of Benguet people of all ages from the different parts the province, held on Wednesday (Nov. 23) at Benguet Sports Complex here. Regarding infra projects, Yap announced that a multimillion convention center will be built inside the sports facility (Wangal).

He added that plans and program of works of the said center are now being worked out by the department of public works. Construction works is expected to be completed before the end of 2025. The convention center which will house a museum to showcase the culture of Benguet will be an income generating project. Yap also disclosed that in due time, a P300-M worth of aquatic center will be constructed in the sports complex.

And additional P50-M was earmarked for the improvement Benguet Sports Complex gym’s roofing. The Benguet representative added that he is exerting efforts in looking for funds to put up additional
bleachers at the sports facility. Governor Melchor Diclas and Vice Governor Ericson Felipe both expressed support the development efforts by Yap as they expressed gratitude the cooperation extended by the
people of Benguet and the leaders of the various local government units (LGU’s).

BENGUET POCKET MINERS CAN "OPERATE" BUT PROTECT THE ENVIRONMENT-GOV. DICLAS 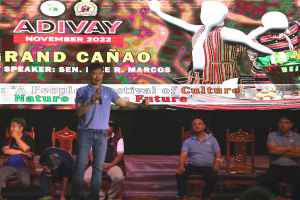