The Biking as a Way of Life mural project t has started Thursday after mayor Benjamin Magalong
painting “climate action wall” at the tailend of a 14 foot high riprap wall at the junction of Legarda Road and Marcos Highway. “We hope to have more murals of this kind sprout in the city,” said the former police turned mayor who told Sin-Agi convenor councilor Leandro Yangot, Jr. that he will make sure the artists involved in the project will be given talent fees though it will come early next
year.

The mural that could be 100 foot long when finished will depict nine bikers with Mounts Santo Tomas and Cabuyao including the two radars as backdrop. Magalong said that the message the mural conveys is one of the advocacies he wants to push – to reduce carbon footprint and promote a healthy lifestyle. The study for the mural was made by biking enthusiast Homer Rigonan, who was
among the few biking enthusiast present during the launching of the mural. The painting will be undertaken by Sin-Agi artists with Gladys Labsan, Ged Alangui, Wigan Lopez Nauyac, Hermie Bruno and Yangot as lead artists.

Some six artist-apprentices from the Free Art Lessons at the Park will join them so they could
better their crafts, said Yangot. “We are honored that the mayor helped us in this project and have our group to implement it,“ said Yangot who also thanked Davies for providing the paints that will be used. Sin -Agi is Yangot’s brainchild and it means siblings with the older helping the younger ones reach their potential.

The Baguio Educators Artists Guild will act as support group since most are teachers trying to earn their masters or doctorate degrees thus “they can’t join us on weekdays but only on weekends,” said
Yangot who added that it may take them two weeks to complete the mural. The giant mural will depict bikers from the different sectors of the society about a hundred meters from the Heroes mural for health care workers.

Yangot told Magalong last week that work will definitely start by December 15 as materials are sourced out and equipment needed will be placed at the venue at a portion of the riprap wall at the junction of Legarda Road or where the Police Station 5 headquarters used to stand. The launching coincided also with Magalong’s birthday with the mayor receiving a portrait of himself done by the
Sin-Agi artists. “It’s a go but then our artists should wait for their talent fee by early next year,” said Magalong during the earlier meeting with Yangot, artist Labsan and Eugene Valbuena of the city
administrator’s office.

“It was a moment at the Loakan Road where one of our fellow bikers rendered it graphically to come out with the proposed mural,” said Valbuena, who leads the City Hall’s biking squad and are on a weekly session most of the time with the mayor. Valbuena said Rigonan also made a digital rendition showing the study plastered at the Marcos Highway – Legarda intersection wall. Magalong said that biking is now a way of life and asked the group that each figure will represent a sector of the society like a nurse, cop, student, teacher and others.

In a Facebook post, Yangot said: “We thank mayor Benjie Magalong for the trust and confidence in our group. We were tasked to do the mural painting at the corner of Marcos Highway and Legarda road.” Yangot said the mural could be finished by December 30 and to be launched on January 2023. He also thanked Davies Paints which provided the paints needed for the mural project.
Meanwhile, Magalong also said that he wants same group to make a mural on the state of the Buyog Watershed at the Pinget-Quirino Hill which is getting smaller every year due to encroachment.

“We want to send the message that it should be stopped,” said Magalong saying that it is one of the city’s watersheds and water sources. He added that a short poetry like an epigram can be made to accompany said mural so the message can be spent that there should be a stop on squatting and preserve the remaining watershed. He also encouraged the artist present to look for more walls around the city where a mural can be painted on. The group is also joining Climate Reality Project
Philippines to raise awareness on climate change and join the worldwide movement to “act now”. 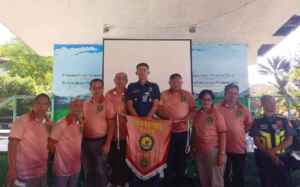