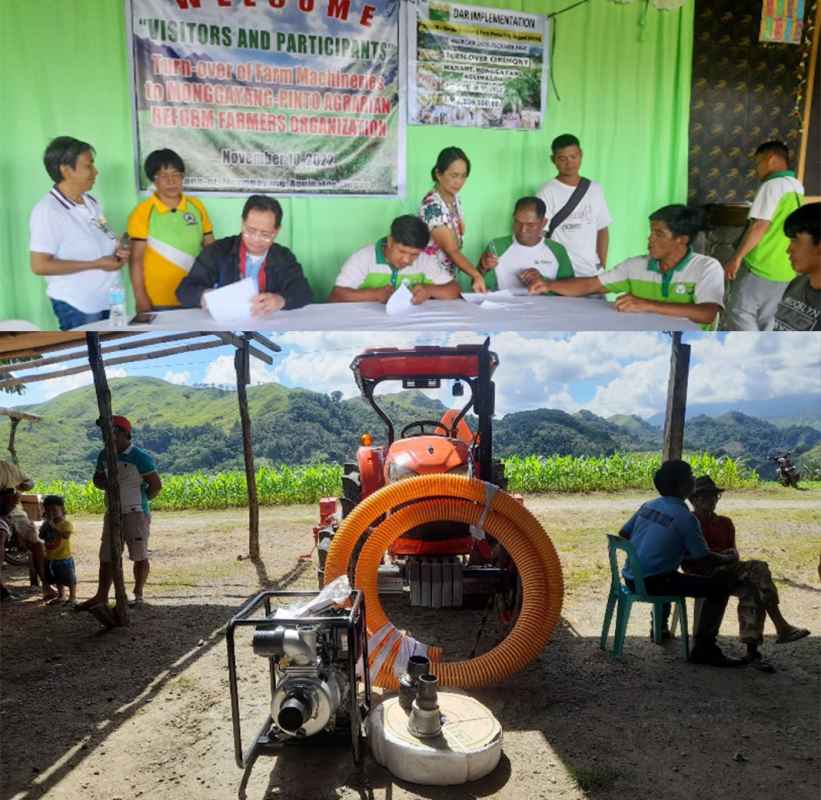 The Department of Agrarian Reform Provincial Office (DARPO) Ifugao held a turnover of Farm Machineries
and Equipment (FME) to the Monggayang-Pinto Agrarian Reform Farmers Organization (MPARFO) in Sitio Manaot, Barangay Monggayang, Aguinaldo, Ifugao on November 10, 2022. The machineries provided are a water pump, a 50 Hp tractor, and a corn seeder with a total project cost of P1,236,500.00.

[These blessings that you have received aren’t from DAR, it is from the Lord in which he uses DAR and us, the employees, to share these blessings that you have prayed for.] The Trust Agreement between the DAR & the Organization was also signed during the turnover ceremony. The agreement consists of the duties and responsibilities of the agency and the organization. MPARFO President Joseph Oman, thanked DAR
and the personnel for the FME granted.

He assured the department that they will take good care of the things they received and are yet to receive.
Major Crop-based Block Farm Productivity Enhancement is a project for the area where Agrarian Reform Beneficiaries and Non-ARBs are individually or collectively engaged in the production of major crops that
primarily include rice, corn, and other crops such as bananas, pineapple, and vegetables. As such, these crops were identified to be major products in a large area of land. It is assumed that the rate of production for the major crop is providing the needs of local/ household consumption as well as surplus produce.

Benguet Rep. Eric Go Yap encourages the people of Benguet to support and be one in celebrating the 122nd Benguet Foundation Day as its...

BENGUET POCKET MINERS CAN “OPERATE” BUT PROTECT THE ENVIRONMENT-GOV. DICLAS

LA TRINIDAD, Benguet- Governor Melchor Diclas on Thursday (Nov. 24) urged pocket miners in the province to protect the environment even as...

BAUANG, La Union- Agents of the National Bureau of Investigation-Region 1 and social workers from the Department of Social Welfare and...