TAGUDIN, ILOCOS SUR – The destinations, history and the culture in Northern Luzon are assets which makes the provinces in the northern part of the country potential for tourism.
Department of Tourism (DOT) Secretary Wanda Corazon Teo lauded the municipal government of Tagudin headed by Mayor Roque Verzosa for coming up with the Tikanlu (Tinungbo, kangkanen and lubi-lubi), which is now on its 10th year.
She said the Tikanlu festival which talks about the unity, cooperation and the historical significance of the town is a potential and can be improved. She likened it to international historical, cultural and religious events which were made feasible with the unity and cooperation of the people from small towns like Tagudin.
“I did not have a second thought when I received an invitation to grace the Tikanlu festival,” she told Tagudinians on Tuesday (May 2).
On Tuesday, Tagundin dance up with a giant “kakanen” (glutinous rice) cake measuring 10 meters in diameter. It was made using 15 sacks of 50 kilos each of glutinous rice produced by the farmers, 1500 coconut and 7.5 sacks of muscovado sugar. It was simultaneously cooked by 50 persons. Sliced 4×4 inches, it was estimated to have served 10,000 people.
While it did not vie for any world record, Mayor Verzosa said with the help of their townmates, they hope to vie for a title in the succeeding years to mark Tagudin’s name in the world.
Teo also added that “in my thought, Tagudin has a big potential to become a major festival. We just need to improve it and I give my commitment to help,” she said.
Tagudin, where the Spanish built sundial in 1848, has a historical significance which can be highlighted to become an attraction.
The nearing canonization of Bishop Alfredo Verzosa, who was one of the four first bishops in the country and the first bishop appointed in Lipa, Batangas who originated from Tagudin will be expected to bring in pilgrims and devotees.
In 2016, Mayor Roque Verzosa, a direct descendant of the bishop, together with the local officials handed the remains of Bishop Alfredo to Pope Francis in Rome, where the bishop’s venerableship and beautification will be done which are stages to his declaration as a saint. 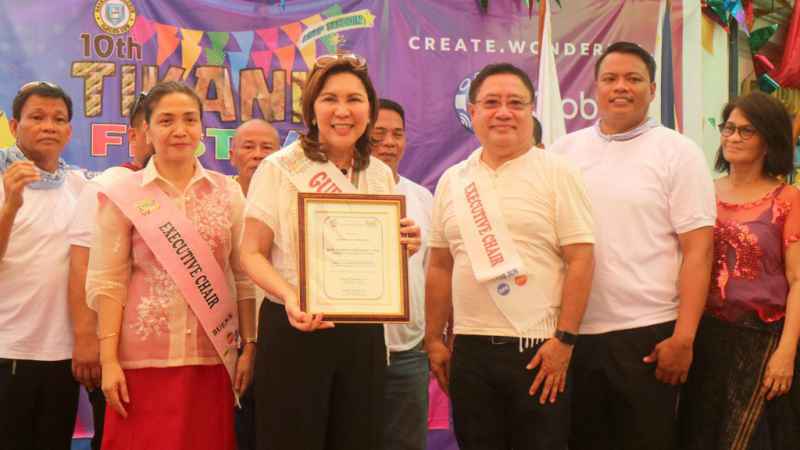 APPRECIATION. Guest of honor and speaker Department of Tourism Secretary Wanda Corazon Teo receives a certificate of appreciation from the officials of Tagudin, Ilocos Sur which is known as the “gateway of Ilocos Region” headed by Mayor Roque Verzosa Jr during the highlights of the Tikanlu Festival. Zaldy Comanda


Teo’s vision for small towns:
Secretary Teo said she supports the initiative of small towns which when improved and developed have potentials to bring in flocks of tourists from different parts of the globe.
“I’ve been going around northern Luzon to see the area. North Luzon has lots of potential as a tourism destination.” She has visited Tuguegarao in region 2 and this first class municipality in region 2. She said she wants to see the Cordillera region and Baguio City.
Teo said she will not leave any region unattended, but will give the support to all so that nobody will be left behind.
Teo said infrastructures will have to be put in place in northern Luzon so that tourists do not have to land at the Ninoy Aquino International Airport (NAIA), but can enter through the Clark International Airport in Angeles, Pampanga. This cuts short by less than two hours the travel time to any part of northern Luzon.
She talked about her roots, her father Ramon Tulfo having been born and raised in Batac, Ilocos Norte, making northern Luzon a special part of herself.
North Luzon, she said is rich in heritage sites, unique cultural practices, pilgrimage sites and natural attractions, which tourists would appreciate.
The secretary pointed out that she saw the potentials of small towns and promised assistance.
Teo was guest of honor during the Tikanlu festival which coincides with the town fiesta.
Tourism contributes 10.2 percent to the country’s Gross Domestic Product (GDP). In the provinces, small, micro and medium enterprises are put up as an after effect of the arrival of tourists in tourist destinations. Flordeliza Agoot / ABN