DSWD ALLOTS P174M FOR CASH FOR WORK PROGRAM IN ABRA

The Department of Social Welfare and Development (DSWD) in the Cordillera Administrative Region (CAR) has allotted a total of PHP174,375,000 for the implementation of a cash-forwork program for the 303 barangays in all 27 municipalities in the province of Abra. Amelyn Cabrera, DSWDCordillera assistant director for operations, said Wednesday they would start the program in eight towns.

“We have finalized the memorandum of agreement with eight municipalities out of the 27 which is worth PHP65 million. We are good to go with the eight towns,” Cabrera said on the sidelines of the first day of the
Kalahi-CIDSS (Kapit-Bisig Laban sa Kahirapan- Comprehensive and Integrated Delivery of Social Services
Kapangyarihan at Kaunlaran sa Barangay) partnership forum in Abra’s capital town of Bangued. The program will be first rolled out in the towns of Bucay, Lagangilang, Licuan-Baay, Bangued, Salapadan, Tineg, Villaviciosa and San Isidro.

Cabrera said a different amount is allotted per municipality with each worker receiving PHP380 daily wage
for a maximum of 90 days. “This is a short-term income generation but the project implementation still uses the CDD (community driven development) approach of planning, intervention, and identification of project,” she added. Cabrera added that the work to be done by the beneficiaries will be identified by their respective communities.

She also assured that the program using the fund will comply with the principles of transparency, participation, and accountability from the community. “Participation of the community from the time the
projects are identified, it is them that implement, they also monitor and they sustain the project after its completion,” she added.

The cash-for-work program in the towns that have already finalized the pact with the DSWD will start this November and will run until May 2023. “The prioritization of municipalities is based on poverty incidence and was not due to the earthquake last July,” Cabrera said. 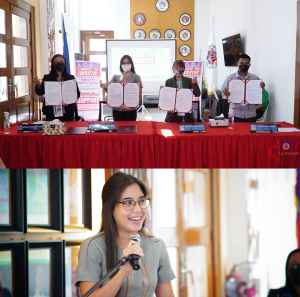