Two words that can express resignation or even defeat. This time when we choose our next set of local leaders, these two words ‘giving up’ take on an ominous and dangerous meaning.

One which can undermine, or at the worst, destroy that which most if us value in life:the freedom of choice.

Today, with the upcoming midterm elections just around the corner, the public through registered voters are given the opportunity to once more render a crucial decision—a decision which will again reflect whether the people have once more ‘given up’ their chance to
have better governance or finally a chance of choosing the right leaders, and ‘giving up’ those who would only abuse and mis-use the power and authority granted them.

There will be no easy way to go about it, that’s for sure. But one thing we can be certain about is the fact that everything is subject to change.

If the voters finally decide to give up the “utang na loob” mentality, the “scratch my back and I will scratch your back” attitude, the ‘selling of votes’ to the candidate who can give the money, or the ‘blind voting’ mentality due to relationship or some other type of attachment to a candidate, then perhaps finally we have raised the
standards of how we choose those who would govern us, at least for the next three years.

Those who could not avoid the temptation of being offered money in exchange for their precious vote, it becomes a test of their will and
conscience whether to finally give up and put a stop to the violation of their right to suffrage.

On the other hand, those who simply vote for just about any candidate without studying the qualities and capabilities they possess, giving up such wasteful and mindless decisions will surely
be a supreme test of discernment and understanding.

In all of this, giving up all those that prevent us from properly and reasonably acting out our right of suffrage will be a big step in the right direction and will certainly lead us to a better tomorrow, hopefully.

The former who will put up these advertisements for all national candidates having the same general format and content, as well as the number of times it will be broadcasted, televised. 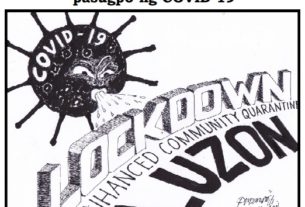