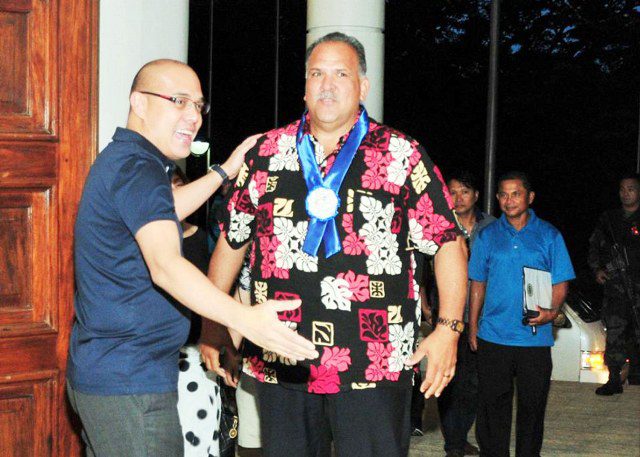 The province of La Union, through Governor Francisco Emmanuel “Pacoy” Ortega III, extends a heartfelt welcome to Mayor Bernard Carvalho Jr. of Kaua’I County, Hawaii on September 12, 2017 at the Provincial Capitol Building, City of San Fernando, La Union.
During the welcome dinner for the mayor, Governor Pacoy highlighted the strong and deep connections of Hawaii and the Ilocandia region since time immemorial.
He also narrated history of immigration of Filipinos to Hawaii since the 19th century. By then, according to him, Filipinos in general have made significant contributions to the state of Hawaii over which hundred thousand Ilocanos had come to live and work there.
“I foresee Agri-Tourism as one of the key talking points but I know that we have much to learn from you across a wide range of subject matters. I hope you will see and realize that La Union has so much to offer and so much potential. I hope that we will become strong and long-time partners,” he said.
The event centers on the commitment of Governor Pacoy and Mayor Carvalho Jr. in realizing the goal to boost the potential of local enterprises to ensure economic gains of the agri-tourism industry for the betterment of the lives of every entrepreneur in the province.
Last year, the Provincial Government of La Union hosted a Mini Boot Camp as part of the immersion program in the Performance Governance System (PGS) for provincial stakeholders from the component local government units.
The PGS, as part of transformative good governance program, targets to realize vision of real change for the greater good of all of La Union. This strategic vision aims to transform the province of La Union to become the Heart of Agri-Tourism in Northern Luzon by 2025.
Governor Pacoy pledged to strengthen the bond between the County of Kaua’I, Hawaii and the Provincial Government of La Union through this unifying goal of transformative governance. HANA JOSUA C. MARTINEZ, PITO-LU / ABN