“(President Duterte) should compel (Cimatu) to immediately desist from releasing contradictory statements through the various offices of the DENR, especially through its rogue Mines and Geosciences Bureau,” Leon Dulce, deputy national coordinator of the Kalikasan People’s Network for the Environment (Kalikasan-PNE) said.

Cimatu should release a clear-cut pronouncement that he will uphold Administrative Order 2017-10, and immediately cancel permits for all prospective open pit mines currently in the exploration and development stages, Dulce urged.

The environment group also urged the President to mobilize the so-called “super majority” in Congress to craft and pass a policy on open-pit mining, declaring a moratorium on prospective open-pit mines until a new comprehensive mining policy such as House Bill 2715 or the People’s Mining Bill is passed.

“If the super majority of Speaker Pantaleon Alvarez could incredibly pass the tax reform law with less than 20 lawmakers in session, surely a simple moratorium on open-pit mining can likewise enjoy the same political will?”

The environment group thinks that the DENR will need such a policy backbone to fortify the open pit mine ban against legal challenges it will surely face from the best lawyers the mining lobby can buy.

Dulce claimed, “(Pres.) Duterte will definitely face pressure from his mining oligarch friends such as the Dominguez and the Zamora clans. Can he stand up against his classmate, Finance secretary Carlos Dominguez, when the open pit mining ban squarely hits the Dominguez-owned Tampakan mining project?”

The President’s repeated pronouncements on upholding the open pit mine ban are welcome, Dulce said, “but we need more concrete actions from his administration to walk the talk. Almost a year after the administration announces the closure and suspension of 28 big mines, it remained only on paper.” ACE ALEGRE / ABN 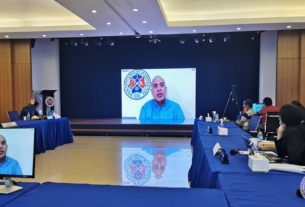