BAGUIO CITY – A security guard, suffering from depression after his live-in partner left him for another man, held his partner’s sister and niece hostage over the weekend here. At past 5 PM Saturday, the security guard (name withheld by authorities) armed with a 9mm pistol owned by the security firm he is working with held the mother and daughter hostage in their residence at Sampaguita Street, Baguio City.

The Baguio City Police and its Special Weapons And Tactics (SWAT), neighbors and later the barangay officials of Quezon Hill Proper Barangay trooped to the site to help calm down the situation. After the Barangay Captain engaged the hostage taker into a negotiation, Baguio City Mayor Benjamin Magalong also arrived at the scene and talked with the security guard. Police Major Dencio Dayao of the Baguio City police station 1 said, the hostage taker was heartbroken and vented her emotions on the two hostages though did not harm them.

The police claimed he demanded that his live-in partner return to him. The guard released the hostages at around 10:40 PM and surrendered at past 11 PM Saturday. According to Magalong, the incident is called a pseudo hostage taking where the hostage -taker vent out his emotions because of what happened between him and his partner. In pseudo-hostage cases, there is a low risk of harm to the hostages. Such incidents generally end when the hostage takers make no demands and they have no history of threats
against or conflict with the hostages. The security guard, now under police custody, will face a number of raps including hostage taking using a firearm, violence against children and women.

2023 PANAGBENGA TO BE LAUNCHED ON DECEMBER 12 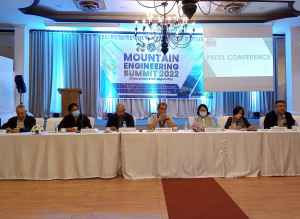 KARPOV BACK IN BAGUIO CONVENTION CENTER AFTER 45 YEARS