Irisan Barangay is being eyed as a center of commercial rabbit production. The Irisan Rabbit Farming Association (IRFA), an enterprise group registered with the Department of Agriculture (DA) and the Department of Labor and Employment (DOLE), has collaborated with the barangay officials and the Office of Councilor Philian Weygan-Allan to encourage the residents therein to participate in commercial rabbit production.

Romnick Kylee Guibong, IRFA President, said they are aiming to convince around 3,000 residents to join the association. In a public consultation conducted by the Sangguniang Panlungsod ng
Baguio on March 3, a number of Irisan residents expressed interest in joining the IRFA for the rabbitry project. 110 residents were in attendance during the public consultation. Another day will
be set for the second batch of participants.

Cultivating the rabbit meat industry is seen as a solution to the shortage of pork supply in the country brought about by the African Swine Fever (ASF) outbreak and the COVID-19 pandemic.

Rabbit farming or cuniculture is an emerging business venture which is considered as a potential source of sustainable income among the residents. Aside from making a profit with rabbit meat, Yabut said there are other ways to raise money with rabbitry.

Rabbit manure which has four times more nutrients than cow and horse manure and twice as rich as chicken manure can be sold as fertilizers. By-products of rabbits such as fur, tails, feet, ears,
and heads can be turned into souvenir items. Other products made from rabbit wool and skins are scarves, bonnets, coats, wallets, and bags.

“Sa pag-aalaga ng kuneho, wala pong masasayang. Lahat pwedeng ibenta,” Yabut explained. Yabut stressed that raising rabbits is not as costly and laborious as raising hogs. Rabbits, according to him, propagate faster than other livestocks. Medium-sized breeds that are ideal for meat production can be bred at six months old with a gestation period of only 28-31 days. Should the rabbitry project thrive, it will lower the cost of rabbit meat in the market, Yabut added. Rabbit meat is currently sold at Php450-Php650 per kilogram.

Meanwhile, Councilor Weygan-Allan said the rabbitry project will help convince people that rabbits are not only social animals that are kept as adorable pets but they can also be raised for consumption.

Weygan-Allan vowed she will pass legislation in the council that will support the said project. The councilor earlier passed a resolution urging Baguio residents and homeowners to engage in rabbit farming to raise the production of rabbit meat as an alternative to pork.

The City Government of Baguio is poised to partner with the DA-CAR for the implementation of livestock raising projects in the city.

A memorandum of agreement will be inked between Mayor Benjamin Magalong and the DA-CAR which will authorize the disbursement of 10 million to the city government in line with the Livestock Banner Program which is one of the department’s priority projects. The program includes free-range chicken production, poultry farming, swine production, mushroom production, strawberry farming, and rabbitry.

The City Veterinary and Agriculture Office shall undertake the aforesaid projects. 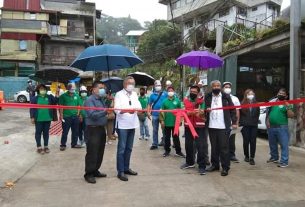