Aside from fears of physical and economic displacements of Itogon villagers, if the project ever begins, are a tsunami of issues that may ditch the project.

Itogon Mayor Victorio Palangdan, himself, opposed the project even as mining giant Benguet Corporation (BC) which has a patented mining claim in the area had agreed with Baguio City for the free use of its 24.1 hectare property. He said, “People will be displaced because the proposed area is thickly populated.”

Mayor Palangdan said the people of Itogon and even the 10-member Itogon town council are against the Baguio ESL project in Antamok. They claim they know nothing official about the ESL project despite it within their territorial jurisdiction.

Mayor Palangdan was also not given any authority to deal with Baguio City, BC or a private contractor that will build the landfill facility.

Earlier, Itogon town council deliberations pointed out “if there is a plan, it should pass the usual process which is ‘bottom’s up’ approach where town officials are part of planning and extensive dialogue even at its initial stage or inception of the project”.

Itogon officials who are supposed to meet with Baguio City officials on July 27 (Friday) instead sent the town’s environment and natural resources officer to listen and accordingly ordered not to commit anything.

Itogon officials led by Mayor Palangdan instead urge BC to return the 24.1 hectare former Antamok open pit mines to the National Government to be utilized as a Minahang Bayan.

BC though had earlier expressed its vehement opposition to Itogon small scale miners’ application for Minahang Bayan, insisting it is the mining giant’s patented claim.

Palangdan, a lawyer said, “it is the property of our National Government because from the start, they got the title of that land because of their mining operation.  It should now be reverted back to the state to become a public land.”

BC had been mining in Itogon since the 1930s.

Even granting that it is a private property by BC, Itogon officials argue, “social acceptability is still a huge question.”

Though according to Mayor Domogan, the energy department had accordingly endorsed and supported the ESL proposal banking that it will significantly help in increasing the supply of renewable energy that could help in reducing the power cost charged to consumers.

The project accordingly involves the put up of a centralized materials recovery facility, an anaerobic digester, a hazardous waste, special waste and medical waste treatment plants aside from hosting the operation of the two Environmental Recycling System (ERS) machines already operational at the Irisan dumpsite in Baguio in converting biodegradable waste to raw compost.

Domogan emphasized the proposed integrated solid waste disposal facility is also envisioned to end the hauling of Baguio’s residual waste outside the city that has eaten up a huge chunk of the local government’s annual budget but if the put up of the facility will not be realized, hauling of the residual waste will still remain as the doable option to prevent the occurrence of a garbage crisis.

While acknowledging every LGU needs to look into such garbage woes, Itogon officials remain unconvinced why they were “kept away in the dark” since the inception of the ESL proposal inside their town and within their jurisdiction.  “If we could have been asked, we could have been their partner even in convincing the people of Itogon to support the project,” a senior Itogon town councilor declared. ACE ALEGRE / ABN 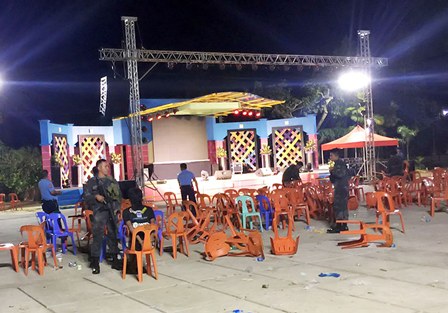