CITY OF SAN FERNANDO, LA UNION – The national validation and certification audit team congratulated the province for being a potential winner for the 2018 Seal of Good Local Governance (SGLG) national award.

This is Gov. Francisco Emmanuel “Pacoy” R. Ortega III delivered an accounting of the performance of the province to defend its bid to the 2018 DILG-SGLG national award to the validation team headed by Dino A. Ponsaran, LGOO VII of the Department of the Interior and Local Government (DILG)-Region VI on August 20, 2018 at the Diego Silang Hall, Provincial Capitol, here.

The activity was attended by the different PGLU department heads, chiefs of hospitals and other key officials of the province.

“We must continue to blaze the trail…we must keep on innovating… we must persist to lead the way in this path laden with challenge. We shall stay the course in faith, in courage…together. We are not La Union for nothing!” Pacoy said, emphasizing about team effort of all stakeholders. “I need everyone to work with me because I understand that everyone is important in the great and transformative mission that I have chosen,” he added.

Ponsaran expressed his appreciation to the presentation of the governor, adding that he personally witnessed how passionate the governor is in his transformative efforts to institutionalize good governance in the province. “The presentation was a manifestation that SGLG is just within your reach. You have been doing your best and the time to reap is now,” Ponsaran said.

He assured that the team gathered enough documents and evidences to support the province’s bid for this year’s SGLG National Award.

He said however that the National Assessment Team (NAT) has the final say if the province will make it or not.  Nonetheless, he congratulated the province for being a potential winner.

Other activities conducted to validate the province of La Union’s bid include the review of documents focusing on some indicators such as financial administration, disaster preparedness, social protection, peace and order, business friendliness and competitiveness, environmental management and tourism, culture and the arts.

The validators were also toured around the province’s Agri-Tourism sites.

The SGLG symbolizes integrity and good performance through continuing governance reform and sustained local development. It is an emerging and progressive assessment system to give distinction to remarkable local government performance across several areas.

La Union has been a recipient of the prestigious award for two consecutive years in 2016 and 2017. EDITH A. CARDENAS, GPC-PPDO / ABN 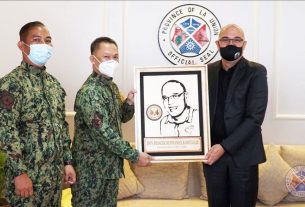 Kalinga to use cash prize from DA to increase rice yield