By mid-morning, the group of pocket miners moved to the surrounding Antamok Open pit area ,and also picked-up non-biogradable wastes which include plastic containers and bottles.Demonstrating true
bayanihan spirit, families of pocket miners, as well as residents in the community – old and young including some women’s group helped in the cleanliness drive. “This clean-up drive, a regular activity of LMA ,is one
way to demonstrate our commitment in protecting our environment and promote health and safety practices ,” Latongan said in the vernacular.

Latongan added that their one-day activity is in support to the environmental efforts of their municipal government as well as the province. The LMA president also expressed his gratitude to the local pocket miners, their leaders, the whole community for their support, and also the assistance extended by the local
police force of Itogon. Tudlong for his part said it their activity is also in support of BFSSMI environmental health- safety program. Years, residents complained their village had become “catch basin” of all types of wastes, especially coming from the upper stream.

They appealed to authorities concerned and to local government units to help them address the problem.
The last time LMA conducted a clean-up drive was in July 27 when a quake struck the region. In fact, as early as 7AM, local pocket miners and the community were actually conducting clean-up when the
incident took place. Minutes after the quake, unmindful of the aftershocks, the group went on ,clearing and collecting garbage flowed down stream, surrounding the open pit. 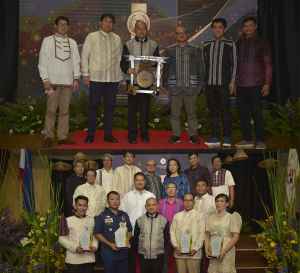