Over 450 top athletes from nine countries, including the Philippines, ramped up the fun in New Clark City, as they competed and vied for podium finishes at the 2022 National Duathlon Championship. The race
event forms part of the selection process for the composition of the national pool who will compete in the
2023 Southeast Asian Games in Cambodia. Triathlon Association of the Philippines (TRAP), the Philippines’ national governing body for triathlon, hosted the much-awaited 2022 National Duathlon
Championship in New Clark City last Sunday, 4 December 2022.

This is our grassroots development for duathlon. Sa triathlon we are also very particular sa 13- 15. We always provide them the opportunity,” said TRAP President Tom Carrasco during an interview with the media. Mr. Carrasco expressed optimism on the quality of athletes that the country will be sending for the 32nd Southeast Asian Games in Cambodia. “Their (athletes) performance now is based on train-to-compete or train-to qualify. January to April (next year) their training mode will switch to train-to-win gold in
the Sea Games. So out of 7 events, we hope to win 4. That is my prediction,” he added.

Participants of the 2022 National Duathlon Championship enjoyed a picturesque landscape as they biked and ran around New Clark City and its nearby communities in Capas, Tarlac. “Andito na ngayon ang TRAP. It is the federation in the Philippines for triathlon and duathlon events. So napakalaking exposure and
trust that is given to us by TRAP. It is really heartwarming. Napakita namin na itong mga venues natin dito sa New Clark City ay perfect for high-level competitions,” said Bases Conversion and Development
Authority (BCDA) Senior Vice President for Corporate Services Arrey Perez.

With its reopening last May after more than a year of pandemic lockdowns and the complex’s use as a quarantine facility, SVP Perez said that the New Clark City is becoming the “venue of choice” among local
and international sports training camps and competitions. “Kami here in BCDA and New Clark City, we are ready for the training camps of our athletes. There is enough time for them to prepare and train,” he assured. National athlete Fernando Jose Cesares ruled the sprint distance men’s elite category, finishing the 5,000(run)- 20,000-(bike)-2.500(run) race in 58 minutes and 3 seconds to beat fellow national athlete
John Leerams Chicano (58.09) and Maynard Pecson (58.13).

Meanwhile, Cebuana Raven Faith Alcoseba claimed the gold medal for the women’s elite category by clocking in 1 hour, 6 minutes and 32 seconds, topping Singaporean Louisa Middleditch (1:07.10) and
Merry Joy Trupa (1:08.50). Opened in 2019, the New Clark City sports complex is the first major sports hub
constructed by the national government since the completion of the Rizal Memorial Sports Complex in 1934. It served as one of the venues for the 30th Southeast Asian Games in 2019. 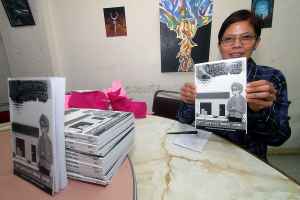 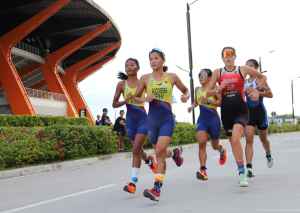