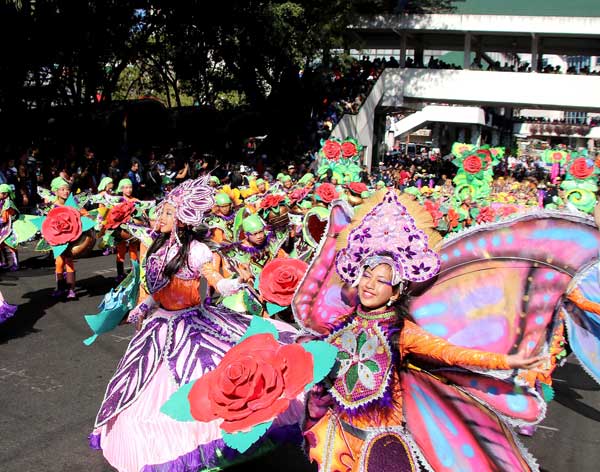 BAGUIO CITY – Pol bets were warned not to do any “ninja moves of politicking” during the Baguio Flower Festival highlights.
Local officials and organizers of the 24th staging of “Panagbenga” (A Time to Bloom), perhaps the most attended festival in the North and in the country warned national candidates and their supporters who are to take advantage of the twin Grand Street Dancing and Grand Flower Float parades against their “epal” moves to woe votes.
This, amidst criticisms against bets who had been “invading” various festivals throughout the country.
Though they can join the parades, they will not be allowed to campaign to ensure order of the festival’s major events.
Mayor Mauricio Domogan strictly warned that national candidates will not be allowed to break the line just to shake hands with the crowd and hand over campaign paraphernalia.
“We want the presence of national candidates in the two major flower festival parades for them to avail of the huge crowd that will be witnessing the said events, but they should strictly adhere to the prescribed rules and regulations in the conduct of the said activities to ensure orderliness and prevent the unnecessary interruption,” Domogan, who though himself a congressional bet, stressed.
The month-long Panagbenga started Friday (February 1) with an opening street dancing parade as a sneak-peep into the grand street dancing parade on March 2, followed by the grand float parade on March 3.
Hundreds of thousands of foreign and domestic visitors are expected to fill up the parade routes to witness the dynamic performances of the street dancers and the flower-bedecked floats.
Anthony de Leon, general manager of the Baguio Country Club (BCC) and co-chairman of the Panagbenga Organizing Committee said, organizers do not want a repeat of previous experiences where there were candidates who joined the parade and defied the rules and regulations. Some broke the parade lines and shook hands with the crowd disrupting the parade flow. Though supporters of candidates are allowed to distribute election paraphernalia, but should be orderly so that it will not distract the parade, he also warned.
Panagbenga is the only festival in the country that was included in the elite list of festivals in the different parts of the world that comprise the International Festivals Association, a feat where no festival in the country might have achieved, beamed Domogan during Friday’s opening. This is yet another celebration of the grandiosity of what Baguio has to offer to the Filipino people and the world, he added. With reports:
Ace Alegre/ABN