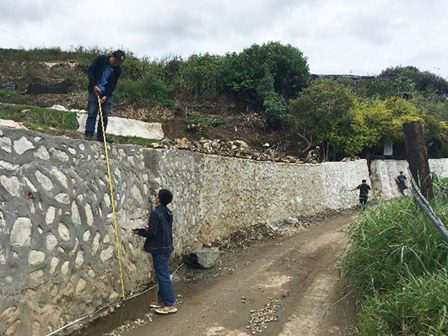 ALAPANG, LA TRINIDAD, BENGUET – Farmers and residents of this barangay can now deliver their goods to the market without worrying about road obstructions during rainy days.
The construction of a 1.76-kilometer slope protection designed to protect the agricultural area as well as residential lots of around 3,735 direct beneficiaries who are residents of sitio Alapang Proper and Atoy is now nearing completion.
The total project cost is P4,086,000.
Engr. Elsa P. Gaspar, rural infrastructure engineer assigned in Benguet, said that prior to the construction, the  condition of the  road is narrow and concreted but the drainage canal and slope protection are absent.  During rainy months, landslides obstruct the road carriage way, blocking the barangay roads to the national highway.
Discouraged farmers experienced production losses and high spoilage rate of their agricultural products caused by landslides on critical portions of the road. Residents, on the other hand, complain that they are prevented from passing through due to road obstruction caused by soil erosion which occurs often during rainy season.
According to the proposed subproject, the lack of slope protection of the access road contributes to high post-harvest losses to agricultural products especially during the monsoon season, typhoons and other natural calamity. The barangay experiences isolation due to landslides and road closures.
In response to this, the Department of Agriculture (DA)-Philippine Rural Development Project (PRDP) funded the construction of a 1.76 kilometer slope protection structure to increase the soil’s resistance to erosion, reducing postharvest losses by at least 10%, increasing agricultural production area by 10% and providing immediate protection of exposed areas as well.
In addition, production losses will be diminished for saleable crops such as Chinese cabbage, lettuce, broccoli, pechay, mustard, chayote, coffee, and cutflowers particularly rose, and crysanthemum abundantly produced in the area.
With the subproject’s objectives, the residents of Alapang expressed their optimism that the construction of this slope protection structure will jump-start the development of their barangay. MA. IMELDA ISABEL B. ZABALA, RPCO-CAR InfoACE Unit / ABN