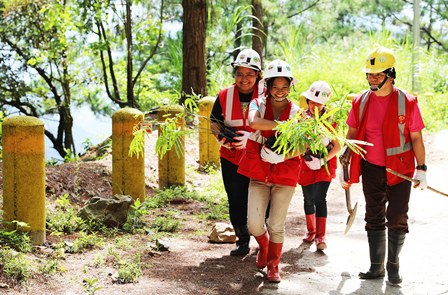 TUBA, BENGUET – Philex Mining Corp. had more than double the area it had targeted for reforestation in 2017, planting 144,714 trees and other floras in 110 hectares (ha.) of land in Tuba and Itogon – the two municipalities that host its gold-and-copper operations in this province – between July and October.

With a 90-percent survival rate, last year’s environmental-protection program also covered new refo areas and those being rehabilitated-replanted to replace the seedlings that did not survive in the previous reforestation programs, which run between three and five years.

Leon Mocate, senior forestry coordinator at the Environmental Quality Monitoring and Enhancement Dept. (EQMED) of the company’s Padcal mine, in Tuba’s Sitio Padcal, Brgy. Camp 3, said in a report that about 2,000 of the total number of trees and other tropical plants used last year had been donated to the outlying communities.

“Our refo program does not only involve us and our contractors planting trees in our host municipalities, but also us donating seedlings to local governments, schools, and other institutions that have established projects on and are adamant about environmental protection,” Julius Bayogan, EQMED manager, said in an interview.

He also said the 2017 reforestation program – which had been designed to reforest 50 ha. of land with 83,350 trees only – involved the planting of the forest trees Benguet pine, kupang, narra, gmelina, teak, ipil-ipil, and antsoan dilau; the medicinal trees eucalyptus and dapdap; the fruit-bearing trees avocadao, bugnay (local wild berry), jackfruit, and guava; the tropical flowering plants bougainvillea, calliandra, and coffee; and vetiver, a bunchgrass used to prevent soil erosion.

In his report updated toward end-2017, Mocate said it was Padcal mine’s different departments and faculty members of the Saint Louis High School – Philex and the Philex Mines Elementary School that had kicked off the planting of trees and tropical plants – a project worth at least P900,000 – and reinforced through the company’s engagement of 10 contractors, each with a team of at least five people.

Philex Mining, which has won numerous awards for its various projects on environmental protection, had allotted for its 2017 refo program P345,968 for the maintenance of 50 ha. of land that was on its second year of reforestation, another P637,215 for 100 ha. of reforested land on its third year, and P210,000 for the 75 ha. on its fifth year of reforestation.

Its latest environmental award was given last November by the Philippine Mine Safety and Environment Association (PMSEA) as a first runner-up in the Exploration Category of a government-initiated reforestation contest. In formal ceremonies held during PMSEA’s 64th Annual National Mine Safety and Environment Conference, in Baguio City, Philex Mining was honoured for its reforestation program of the disturbed areas at its two production-sharing agreements with the government and in connection with its Padcal operations in this province.

After spending close to P70 million for its reforestation activities in the outlying communities – both host (Brgy. Camp 3, in Tuba, and Brgy. Ampucao, in Itogon) and neighboring villages (Brgys. Camp 1 and Ansagan, Tuba, and Brgy. Dalupirip, Itogon) – for 30 years, the company has reforested about 3,000 ha. of land in its host municipalities.

Before 1987, Philex Mining had pursued in the 1960s a community-based reforestation program, which served as a livelihood project for some of its stakeholders. PR / ABN 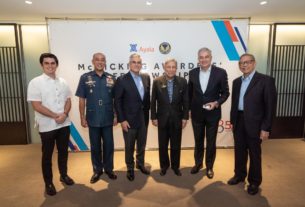 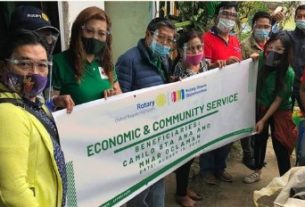