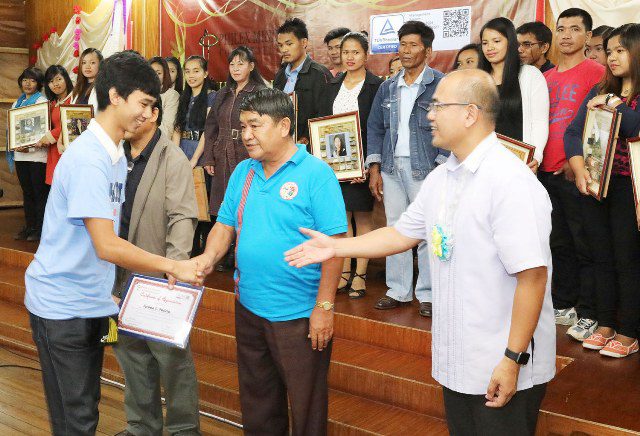 TUBA, BENGUET – Philex Mining Corp. has awarded 30 new college scholarships to beneficiaries in the host and neighboring villages of its Padcal mine in this province, bringing to at least 95 the total number of scholars for the current academic year enrolled in various schools in Baguio City and Benguet, and nearby Pangasinan and Nueva Vizcaya.
Other than the six old scholars who have failed to achieve the grade-weighted average required by the company—and who now receive a 75-percent financial assistance—the rest of the scholars enjoy free full tuition, a book allowance, and a monthly stipend.
“We are very proud of this program, as everybody agrees on the importance of education for the future of an individual, his or her family, the community, and the whole society,” the company’s CEO and president, Eulalio Austin, Jr., said. “And we still extend assistance to those scholars who even have failed to obtain our cutoff grade average.”
The number of new scholars may increase as there are four other applications undergoing screening, according to Aurora Dolipas, manager of Padcal’s Community Relations (ComRel) Dept., who earlier said the company had set aside P14.4 million for its scholarship program for college, high-school, and elementary students, as well as for those in the technical/vocational (TechVoc) courses.
Last year, Philex Mining allotted P11.8 million for its 114 full college and 24 TechVoc scholars; 374 students in elementary and high school who received educational subsidies; and 130 secondary students who were given education assistance (monthly monetary allowance).
In a report, ComRel’s Crisel Alberto-Rosado said the first semester of schoolyear 2017-18 has 64 full college scholars and five others enjoying financial assistance through the company’s Social Development and Management Program (SDMP), while 25 full scholars and one other receiving financial assistance through the DMTG, or Development of Mining Technology and Geosciences.
All the 95 college scholars have a budget of P2.82 million, broken down as P1.87 million for the first 64; P69,699 for the next five; P858,768 for the 25; and P18,750 for the last one.
SDMP and DMTG join the IEC, or Information, Education and Communications campaign, as three of the company’s major programs on corporate social responsibility (CSR). Having been implemented religiously by the company, these three programs get a mandated current annual budget of 1.5 percent of Philex Mining’s total operating expenses in the previous year.
This year Philex Mining saw 24 of its college scholars graduating in various disciplines from the different colleges and universities, while seven other scholars finished their TechVoc courses. The company has also provided scholarships to 90 students in senior high school (Grades 11 & 12) and 140 students in junior high school (Grades 7 – 10). About 200 high-school students and 300 elementary pupils, on the other hand, were awarded educational subsidies.
Having adhered to its conscientious way of doing responsible mining over the past more than 60 years of operations, Philex Mining had sent to school 303 scholars in various college courses between 2002 and 2016, with some of them having been gainfully employed in the company after graduation. These scholars are now engineers, architects, certified public accountants, registered nurses, teachers, medical technologists, policemen, and community organizers, among others, and are successful in their respective fields.
Some of the new scholars, who have yet to receive formal notification from Philex Mining, said they would like to emulate those who came before them, thankful of having had the chance to finish their studies for free and become productive members of society.
“I will never let Philex Mining down,” said Reginald Tero, 20, of Tuba’s Sitio Mangga, Brgy. Camp 3, and a fourth-year IT student at the Baguio College of Technology, in Baguio City. “I will make them proud for having me as one of their scholars.”
He added, “I know this comes with great responsibility. Responsibility toward the company and for myself—getting qualified or having high grades.”
Grace Ducas, 22, a resident of Brgy. Camp 3’s Sitio Alang and a third-year student taking up Bachelor in Medical Laboratory Science (BMLS), in Baguio City’s Pines City Colleges, said, “I am forever grateful to Philex Mining for being a part of this scholarship program, giving me a chance to pursue my dreams in life.”
Alberto-Rosado said foremost in the screening of applications for college scholarship is to determine that a student is, indeed, a resident of any of the host or neighboring barangays -collectively referred to as outlying communities -and has a minimum weighted average of 80 percent.
“Philex Mining wanted to accommodate more scholars, and so we have lowered the weighted average requirement,” said Dolipas, whose department also responded favorably to requests from parents and elected officials in the host towns of Tuba and Itogon, to widen the reach of the scholarship program.
Philex Mining has Camp 3 and Itogon’s Ampucao for its host barangays, as well as Camp 1 and Ansagan (both in Tuba) and Dalupirip (Itogon) for its neighboring barangays. PR / ABN