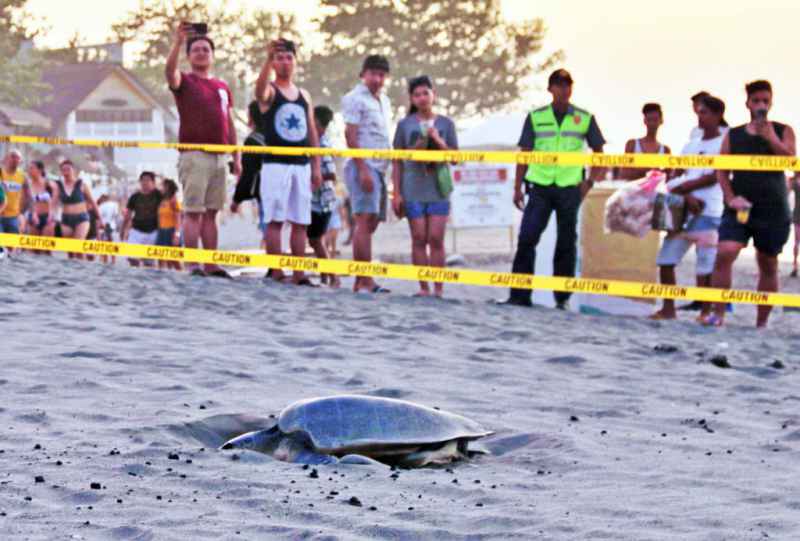 SAN JUAN, LA UNION – La Union’s phenomenal November tourism pitch, “Surf Break”, got another break – a VIP visit.
Not anyone but a “Very Important Pawikan” – an olive ridley sea turtle came ashore Sunday afternoon (October 28) in barangay Urbiztondo here to lay her eggs in broad daylight.
Sea turtles like olive ridleys only lay their eggs where they hatched.  The VIP might have been hatched in Urbiztondo some 25 years ago.
Laying 101 eggs that Sunday afternoon, the usually noise and light-shy mother pawikan slowly approached the sand, the same grounds where hundreds of mother olive ridleys have been hatching, before sunset witnessed by a delighted “La Union Surf Break” crowd treated with the rare natural spectacle, said Carlos Tamayo, coordinator of the Project CURMA (Coastal Underwater Resource Management Actions), a pawikan conservation and protection program supported by the Science of Identity Foundation (SIF-CARE).
Supported by policemen, coast guard auxiliary, men and women from the Bureau of Fire Protection, Municipal Disaster Risk Reduction & Management Office, Urbiztondo barangay captain Eric Valdriz, CURMA volunteers managed the delighted crowd to create a safe perimeter around the nesting turtle.
The mother sea turtle was tagged and measured before it returned back to the sea with a rousing send off by the Surf Break crowd, added Tamayo.
The nest was transferred to the CURMA hatchery nearby for safe monitoring and release after 50-60 days.
Tamayo said there were already two nests at the hatchery since the nesting season started earlier this month. Nesting season ends in February. The first nest has 85 and the second with 118.
Sea turtles, especially green sea turtles, are one of very few creatures (manatees are another) that eat sea grass. Sea grass needs to be constantly cut short to help it grow across the sea floor.
Sea turtle grazing helps maintain the health of the sea grass beds. Sea grass beds provide breeding and developmental grounds for numerous marine animals. Without sea grass beds, many marine species humans harvest would be lost, as would the lower levels of the food chain. The reactions could result in many more marine species eventually becoming endangered or extinct.
Only sea turtles feed on jellyfish. If they become extinct, the deadly jelly fishes will multiply exponentially, according to CURMA.
“More turtles are coming to nest in the following months,” Tamayo was optimistic. “Let us all keep the beaches clean, quiet and safe for all.”
But the bustling tourism in the San Juan is challenging the nesting ground of the olive turtles, CURMA warned.
Recently, an establishment began to build structures right where the nesting ground is in Urbiztondo.  But not without conservationists, including CURMA raising questions that prompted the environment department to shut down the planned restaurant.
“We are transient caretakers of the Earth and should act responsibly towards all living beings and Mother Earth herself,” Tamayo pointed out. Together we must stand to protect our beaches and environment so that those living beings (like the pawikan) will still have their homes, he explained.
Two years ago, a huge international hotel chain planned to build along the nesting ground but CURMA with the San Juan local government negotiated with the developer to do structural considerations not to build too close to the nesting site. ACE ALEGRE / ABN