The Cordillera Peoples Alliance condemns the recent approval of the TRAIN 2 in the Duterte-controlled House of Representatives led by the newly-installed House Speaker Gloria Macapagal-Arroyo calling it a ruthless attempt to worsen the plight of indigenous peoples and the poor majority of the Filipino population. Last September 10, the Lower House hastily approved on final reading the TRAIN 2, or House Bill 8083 also known as Tax Reform for Attracting Better and High Quality Opportunities (TRABAHO Bill). TRAIN 2 will bring down corporate income taxes from 30% to 20%, grant additional benefits to corporations and reward tax incentives to potential investors.
According to CPA Chairperson Windel Bolinget, “this is an outright treachery to the poor majority of Filipinos who have been devastated by the TRAIN 1 implementation and will only benefit the oligarchs and foreign corporations. As the first two installments of Duterte’s tax reforms, TRAIN 1 & 2 is a twin attack against the poor and marginalized indigenous peoples while serving the wealthy few, with additional perks and benefits given to them on a silver platter. It is a means to generate massive government income through peoples’ taxes to fund the ambitious Build-build-build program of the administration, the modernization of the AFP and other military and defense spending, and to pay the ballooning foreign loans.”
“Indigenous peoples bear the brunt of Duterte’s tax reform program. The sky-high prices of prime commodities such as rice and other food products, rising costs of transportation brought about by the excise taxes on petroleum products was a result of the TRAIN 1 implementation. Inflation rose to 6.4 %, the highest in almost a decade, while wages of ordinary workers (P320-P330 in the Cordillera region) remain constantly way below the family living wage of P1,175. Research group IBON estimates that one in every four Filipinos (25%) remain unemployed or underemployed. Worse, the country’s foreign debts rose to more than P7 Trillion,” added Bolinget.
“TRAIN will not bring food on the tables of ordinary Filipinos, especially the marginalized indigenous peoples whose ancestral lands, natural resources and livelihood sources are constantly threatened by destructive projects and the militarization of communities. It will not solve the country’s chronic poverty brought about by joblessness, low wages, contractualization and unfair labor practices, and insufficient or lack of access to basic social services. Instead, it will make situations worse by further opening-up our country to plunderous and greedy corporations who make profits out of our natural resources and the desperate conditions of workers,” said Bolinget.
Bolinget also said that large foreign-owned corporations already enjoy tax holidays and similar incentives in so-called export processing zones or special economic zones and mining projects but Filipino workers remain hostage to slave-wages and unsafe conditions of work. He laments that TRAIN 2 is a go-signal to large mining and energy corporations to further plunder our natural resources and our people.
“With TRAIN 2, more private companies and transnational corporations will target the Cordillera and other ancestral lands of indigenous peoples for resource extraction and plunder. At present, more than 100 various mining applications are under process in the Cordillera, including the AFTA 008 of CEXCI-Nickel Asia which covers 43,000 hectares of ancestral lands. There are also 87 hydro-power projects awarded by Department of Energy, the majority of which are owned by energy giant SN Aboitiz which has Norwegian investment thru Statkraft and the Norwegian Investment Fund for Developing Countries (Norfund). This means that for indigenous peoples the worse is yet to come. “ added Bolinget.
“Instead of bleeding the people dry from massive taxation, the Duterte government should seriously pursue a program of national industrialization founded on genuine agrarian reform to create jobs and maintain a self-sufficient and sustainable local economy. The prevailing neoliberal policies on the economy favoring large, private and foreign corporations will only worsen the condition of ordinary Filipinos who are desperately seeking jobs and are being forced to get employment abroad. But the Duterte regime has proven itself to be a lapdog of foreign corporations and local oligarchs which is why it continues to inflict misery to ordinary people and heightened national oppression of indigenous peoples.”
“The present economic condition only pushes the further political isolation of the anti-poor Duterte regime. We encourage the Filipino people to rise up and fight the tyrannical and anti-poor Duterte regime. We are challenging the Senate to junk the TRAIN law.” CPA PR/Sept13, 2018 / ABN 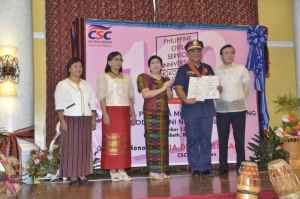 The prominence of communication