‘Tuned,’ nurturing Igorot heritage amidst the invasion of modern gadgets

TADIAN, MOUNTAIN PROVINCE – The leaders of this 4th class municipality are earnestly trying to indulge the younger generation in the preservation of their heritage and cultural pride.
Tadian elders together with Mayor Anthony Wooden and other municipal officials in their full indigenous attire express their eagerness to inculcate to the young “Ytadians” (people of Tadian) that “tuned” (Igorot term for planting rice) is not just a way of life but is a cultural pride of the Igorots of the Cordillera region ensuring an abundant harvest. 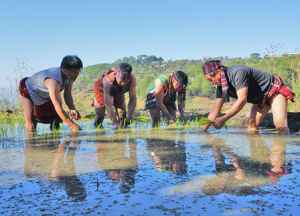 TRADITIONAL RICE PLANTING. Family members and even neighbors garbed in their colorful native attires participate in the “Tuned” ritual or rice planting in their “kelleng” or small rice paddies which is a portion of their “Payew” or rice terraces at Poblacion, Tadian, Mt. Province. The “tuned” or “panagtuned” ritual was part of the activities of the Launching of the Tadian Eco Tourism. GABRIEL ZAPATA

Wooden said that some of the young “Ytadians” may know how to plant rice using indigenous method but they do not have the enough appreciation that such practice is an art enriched by their ancestors through generations.
He said that eventually, the minds of most of the young people now are consumed by the crave of having instant outputs or immediate results of their work influenced by the presence of modern technologies particularly by gadgets such as cell phones, tablets among others setting aside the patience of traditionally waiting for the fruits of hard work.
The elders as well as the government officials patiently readied the spot where they will plant the rice by “softening” the flooded rice paddies with their feet. This will ensure that the young rice stalks will be planted evenly on the said paddies.
Before planting the young rice stalks, the farmers will prepare the soil by manually plowing the paddies, cleaning them, flooding with water from the irrigation. The whole process is called “sama” or if translated to the nearest English terminology, preparing the soil.
If the rice paddies are ready, the farmers will then prepare the young rice stalks for systematic planting. Then they are now going to plant them, “mentuned” (to plant rice).
According to Wooden, they planted “Diket” or glutinous rice (also called sticky rice) commonly cooked as sweet native delicacies. He said that they will have to wait for six months to be harvested or “maani”. The old Ytadians usually used the “rakem” or the indigenous harvesting tool, a piece of wood with a curved blade in the middle. Unlike the sickle or “kumpay” where the farmers harvest the mature rice stalks by the bulk or how many stalks his hand can grasp, using the “rakem” requires patience in harvesting the produce per stalk.
Wooden hopes that planting rice with their indigenous attire will remind the youth that this traditional farming fed generations. “I pray the young Ytadians and the other young Cordillerans will get the message not to let go their rich cultural heritage amidst the invasion of modern technology on the lives of the people.” ALDWIN QUITASOL / ABN