Students from the University of the Philippines and some members of the Anak-Pawis hold a protests rally in front of the gate of the university observing physical distancing against the anti-terror bill which was approved by the Lower House and expected to be signed by President Rodrigo Duterte after the Senate deliberation.
The protesters claimed that if once approved it might be abused by the enforcer of the government. This bill according to them is subjected to all Filipinos as claimed by Neri Colmenares in his previous speech.
The protesters shows no violence but reacted to the manner of the police Baguio creating noise using their megaphone while they are chanting.
Photo by MAR OCLAMAN/ABN 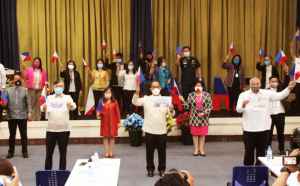