LA TRINIDAD, Benguet – Carl Jammes Martin, the brightest Cordilleran prospect since World Boxing
Association junior welterweight champion Roberto Cruz in the 1960s and bantamweight world title contender Rey Tam in the 1970s, will be fighting here for the first time after 20 fights and 20 victories.
Miller Dep-ay of the Pinoy Prodigy Boxing Promotion made the announcement this week saying the reigning WBA – Asia super bantamweight champion hopes to add another belt when he fights at the
Cordillera Career Development College on December 17.

Dep-ay said that Martin will go up against Thailand’s Komgrich Nantapech for the International Boxing Federation Pan-Pacific Super Bantamweight Championship that will headline the 10 bout event co-presented by Highland Boxing Promotion. “We are bringing Martin here as we also hope the best
for him before he goes abroad to fight in the bigger arena,” said Highland top man Brico Santig. Martin had been signed by Probellum, which manages Nonito Donaire, Jr. as well, in a move that could net the
Lagawe, Ifugao native a lucrative fight soon.

The 23-year old Martin, who won 16 of his victories via knockout, had been under the radar of international promoters for a couple of years now but has opted yet to fight locally to improve on his skill. Martin took the Philippine Boxing Federation bantamweight belt in May of 2019 which he defended successfully later that year. He returned to the ring on December 18, 2020 , after the Covid-19 lockdowns, as a super
bantamweight and beat Richard Rosales. He next fought Joe Tejones on Feb. 20, 2021 at the Binan Football Stadium in Binan, Laguna and retired the latter in the fifth round after a body shot.

On Dec. 4, 2021, he unanimously decided Mark Anthony Geraldo to win the PBF crown. With an 11th round TKO victory on Ronnie Baldonado on March 12, 2022 at the Eklorde Gym in Sucat, Paranaque,
Martin retained his PBF title and annexed the WBA Asia super bantamweight title. Martin’s last fight was on
July 30 at the SM San Lazaro in Manila in the Battle of Tondo where he defeated Tanzanian Charles Tondo to retain his WBA belt. Another Ifugao will be highlighted in the Martin Trinidad fight as MJ Oduna faces Danny Tampipi in an eight round fight in the same weight division. Oduna won last month
in Sucat, Paranque.

Dep-ay said that three other fighters could be included in the December 17 Martin fight with Edward Heno,
“King” Arthur Villanueva and Genisis Libransa as they yet seek opponents for the three exciting fighters. 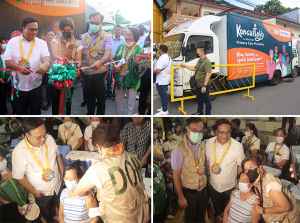