Baguio experienced another surge this week as confirmed coronavirus disease (Covid-19) cases rose by 54 from the period August 25 to Sept. 3, the Public Information Office – Baguio reported. It was a 46 percent jump from the same period last week as the city reports 7.71 new infections every day from an average of 5.29 new cases last week.

Total confirmed cases this week rose to 362 with Thursday’s reported five new cases and a high of 18 last August 25 and a low of two cases this week.

The PIO went on the say that six patients recovered Thursday “even as five more cases were added as a result of the continuing expanded testing in high risk establishments.” PIO – Baguio chief Aileen Refuerzo said: “Four of the patients are workers of a remittance center who were tested in response to the call of Mayor Benjamin Magalong for mandatory testing.”

She added: “The mayor called anew on banks, remittance centers and other establishments with big volume of customers to heighten their health and safety measures to prevent disease contraction and transmission.” Except for a 58-year-old female new case on Thursday, all the new patients are in their early 20s.

With the six recovered patients, there are 263 patients that have survived the dreaded virus or a 74.3 percent recovery rate and only 10 deaths, the last was reported last Wednesday, an eight-day old baby from Mountain Province.

Refuerzo said the baby was born on August 1 in Mountain Province, brought to the Baguio General Hospital and Medical Center on August 4 for congenital heart disease checko ups. The baby tested negative for Covid-19.

On August 9, the baby was referred to the University of the Philippines – Philippine General Hospital, there she was tested positive on August 10. The baby died on August 20 while the heart procedure was being done. Magalong, according to Refuerzo, said the city continues to find ways to sustain its expanded testing program to locate more positive patients and implement control measures at once. Refuerzo further said that Magalong has been getting help from the Philippine Red Cross which has been doing swab testing using the Reverse Transcriptase-Polymerase Chain Reaction (RTPCR) with the help of Covid-19 Program Deputy Chief Implementer Sec. Vince Dizon last weekend.

The PRC has so far covered a total of 824 persons from high risk sectors. He said that of the number, 14 turned out to be infected indicating a positivity rate of 1.7 percent. (The 14 cases have been reported in batches in the previous days until today).

“We are presently identifying the target sectors and sub-sectors,” the mayor added. 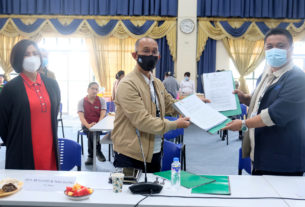