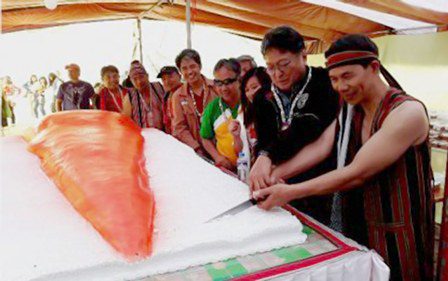 BUGUIAS, BENGUET – A giant carrot cake was baked for residents of this town last Saturday, with 1,600 people partaking of the bounty, as the highlight of the week-long 2nd ‘Albubo’ and vegetable festival.
Buguias Mayor Ruben Tindaan explained that the inclusion of the ‘giant carrot cake’ as part of the festival is a representation of the fact that majority of the highland vegetables produced in the Cordillera comes from this town.
Tindaan said the town’s government wanted to showcase the importance of the vegetables by concocting a giant image of a carrot, made of carrot cake. It is also the town’s celebration of the ‘albubo’, a tradition where the people voluntarily aid one another in any endeavor, to show their ‘bayanihan’ spirit without expecting anything in return.
Four bakeshops in the town collaborated in baking 108 pans of carrot cake, which were pieced together to create the 5-meter by 9-meter rectangular cake, with an orange carrot tuber on top of it, also made of carrot cake.
The collaborating bakeshops were the Almondbread Bakeshop and Grocery owned by Marissa Bestoca; Chings Bakery owned by Rita Ching; the Manna Bread Bakeshop owned by Marina Obar; and the Awls Bakeshop owned by Elton Awal.
Buguias is the leading producer of highland vegetables – cabbage, potatoes, beans, Chinese pechay, broccoli, and mostly carrots.
With the albubo culture of helping one another, the bakeshop owners, together with their employees, used 200 kg. of carrots, a thousand eggs, 1,620 kg. of all-purpose flour, 1,728 kg. of brown sugar, 288 blocks of butter, 2,280 g. of cinnamon powder, 4,800 g. of baking soda and baking powder, 2,160 g. of salt, and 108 kg. of confectioners’ sugar for the icing.
A total of 1,600 slices measuring 3 inches by 4 inches each were distributed to the community for P20 each.
The event was attended by thousands of residents, who all flocked to the Benguet State University Loo campus for the day’s activities and to see the giant carrot cake. A number of people from other towns were also seen joining the festivities.
Among them was the group of Christina Stieber, commercial counselor of the Austrian embassy, who said it was her first time to encounter such event, and see a massive carrot cake.
Stieber also expressed amazement at the Buguias townspeople’s kindness and warmth, their culture, and how everyone gladly took the day off from their usual chore of attending to their farms only to take part in the town’s festival.
“I’ve never been in this kind of festival, as I’m from a different country,” she said.
On top of the giant carrot cake for all, the event also showcased cultural shows and performances, games, and rituals. PAMELA MARIZ GEMINIANO, PNA / ABN