BAGUIO CITY – The windfall for performing athletes keep coming in as an amount close to PHP900,000 in bonuses have been released to 297 athletes for their wins in the Batang Pinoy (BP) national finals held here in September 2018.

“More than 90 percent of the total athletes have already received their bonus,” said Paul Rillorta, of the city sports office, on Wednesday.

“They got 30 percent ofthe amount of the incentive,” said Rillorta, who helped facilitate the release of the bonus totaling about PHP857,000.

The amount came from the PHP3 million cash prize of the city from the Philippine Sports Commission by winning the overall crown. The amounts of P3,000, P2,000, and P1,000 for gold, silver and bronze performances, respectively were received by winning athletes.

The bonus prize came months after the city government released the incentive of athletes for winning in the national competition.

The city government has passed in 2016 the athletes incentive ordinance, defining the amount an athlete can get in particular levels of sports competitions.

Athletes 15 years and younger have started to receive their bonus cash prize in May and 297 have already received their bonus.

“There goes PHP7,000 for my kid,” said Baguio-based journalist Aldwin Quitasol, whose son Ranyag, a wushu taolu player, got that amount for his gold, aside from two bronze medals in the Baguio hosted event last year.

Cebu finished second overall with a haul of 36-40-44, with Laguna at third with a 34- 13-31 tally. Earlier, outgoing mayor Mauricio Domogan promised to give the winning Baguio athletes a bonus for their effort, which event happened immediately following the devastation from typhoon “Ompong” that killed scores of people in Baguio and Benguet.

Baguio, which won the overall crown in 2016 in Tagum, finished second in the BPLuzon last month. The winners will go to the national finals in August in Puerto Princesa City, Palawan.

Meanwhile, winning athletes from the 2019 Palarong Pambansa received a total of PHP395,000, a far cry from the PHP600,000 plus total incentives in the 2018 edition held in Ilocos Sur.

It is much lower now because Baguio banner Team Cordillera landed a dismal 10th after its fifth-place finish in 2018. 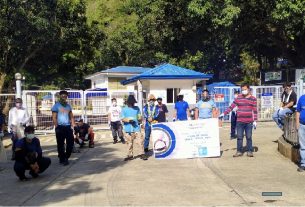