BAYAMBANG , Pangasinan – A temporary bailey bridge with a five-ton load limit has been constructed at the Carlos P. Romulo bridge in Barangay Wawa here, which enables the reopening of the bridge to light vehicles. In a statement issued on Thursday, Department of Public Works and Highways (DPWH) 1 (Ilocos region) information officer Esperanza Tinaza said the bailey bridge is one-way traffic and vehicles passing it should be 20 meters apart.

“In order to notify drivers and pedestrians, warning signs were also placed along the route,” Tinaza said.
The installation of the bailey bridge was completed two weeks after the Carlos P. Romulo bridge collapsed, she said. “Vehicles above five tons are still prohibited from passing through the bridge and are advised to use the alternate routes,” Tinaza said. The alternative routes for all other types of vehicles are via Bocboc Bridge- Mangatarem and vice versa for Bayamb ang-Agui lar San Carlos road; via Carmen Junction-Manat Road (National Road); and via Rosales-Tarlac, take Bayambang-Bautista- Alcala-Sto. Tomas-Carmen,
Rosales Road/Manila North Road and vice versa. Joel Austria, a motorist, said he was glad that light
vehicles could now pass through the bridge.

“Wawa bridge is a faster route when going to Tarlac or Manila,” he said. DPWH-1 Director Ronnel Tan said the bridge, built in 1945, has a load limit of 20 tons but the two trucks – a 12- wheeler dump truck and an elf truck weighing about 63.3 tons and six tons, respectively – caused the total collapse of the bridge.
“The condition of the bridge is fair, meaning there are no visible major defects,” he said. The two trucks, which were carrying fertilizer and sand, respectively, were passing through the bridge when a portion collapsed, resulting in injuries to four persons. 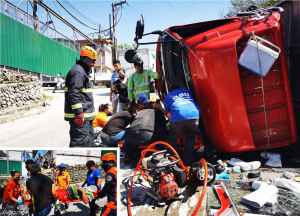