A red tagged Baguio City Mayor Benjamin Maglong is pushing back against accusers. The irked chief executive reminded Pastor Apollo Quiboloy, former antiinsurgency task force spokesperson Lorraine Badoy and ex-rebel Jeffrey “Ka Eric” Celiz that no one is above the law, “To be accused that I have turned my back on my lifelong commitment against the CPP/ NPA is a grave insult that
sweeps aside my lengthy and loyal service to the Philippines.

If my actions as head of a local government are under question, let due process be sternly observed. By all means, take the necessary steps that I be sanctioned, in accordance with procedures in place, without having to be publicly scorned over a non-issue. In relation to the above-mentioned personalities who have acquired the habit of incessantly defaming people without an iota of evidence, be reminded that no one is above the law.”

Badoy and Celis, then took the lead of the pastor and during their programs at the Sonshine Media Network International, a company owned by Quiboloy. Magalong said “This tirade against me is unfounded and baseless and has subjected my person to needless and undeserved condemnation. My public life as a police officer is an open book. I take pride in having been schooled in the Philippine Military Academy, where values as a soldier have been honed to better use in my humble being in the course of my service to the country since 1982.

I have fought the Communist Terror Group in Luzon and Mindanao from the time I graduated as 2nd lieutenant in 1982. My first assignment was in Abra where I was wounded in combat against
communist insurgents. From that year to 2005, I staked my life fighting the CPP/NPA, leading my men not from the rear but up front in numerous operations. All these can readily be validated by
the simple act of interviewing the men and women who served with me in the Philippine Constabulary when I was assigned in Abra and Benguet, in Agusan Norte Provincial Command and in the PNP Special Action Force.”

Following the accusations, various groups from the police and military groups have pitched support for the former general with the Philippine Military Academy alumni, also releasing their statements of support for Magalong. In 2022, Magalong ordered the city police force to take down posters and tarpaulins that tag local activists and students as members of the Communist Party of the Philippines and the New People’s Army, saying unfounded allegations can do damage to a person. 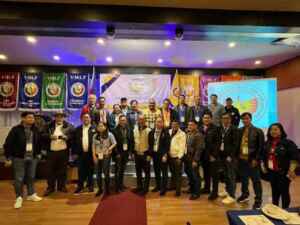 VICE MAYOR’S LEAGUE OF THE PHILIPPINES 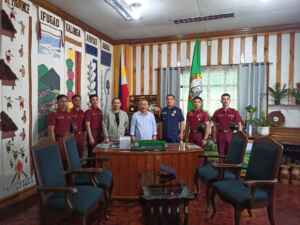 PNPA IN THE HOUSE!