Manila Southwoods and Alpha Phi Omega Golfers – Team Alpha maintained their lead until the final round to win the premier Seniors Championship titles as the seniors side of the 72nd Fil-Am Invitational Golf Tournament drew to a close Thursday. This as six local squads made it to the top podium and several others as runners up. The many time defending champion Southwoods shot a closing round of 106 for a 463 four day aggregate to win the premier Fil Championship and maintain its 11 point edge on Luisita Golf and Country Club at the Baguio Country Club.

Jun Jun Plana celebrated 25 years with the Carmona, Cavite squad by leading the team anew with 29 and with his earlier rounds of 30, 38 and 34 as he won his umpteenth team victory on top of the Group 1 individual trophy where he beat Luisita top man Benjie Sumulong by nine points. Jose Roy III and Raul Minoza shot similar 26, while Manfred Guangko closed with a 25 to count for the team. Rafael Raymundo led Luisita with 29 points, Rodel Mangulabnan had 28, while Sumulong and Danilo Cruz chipped in 26 and 22, respectively, to count for the team.

Riviera Golf secured third place with a 99 and 416 total. Over at the Camp John Hay golf course, APO closed with 107 for a four day total of 379 for a five point victory in Am Championship. Raul Lambino led APO with 31 points, while Demetrio Saclot, Querubin Alcantara and Reynaldo Talatala scored 30, 25 and 21 to count for the team which had earlier rounds of 85, 96 and 91. Srixon IMG closed out with 109 points to move past Dugong Bughaw in the standing after a 374 four day aggregate and beat the latter by two points.

The flight best 109 were the efforts of August Cruz (32), Efren Leonardo and Bernard Chang with 26 and 25 from Francis Roger Telan..Dugong Bughaw could only muster 101 to finish third with 372 points.
Dethroned defending champion Manila Southwoods missed the podium after a four day total of 354 after a 105 last day round, while former Fil Championship titlist Megafiber took the tail after a closing round of 94 and 353. Camp John Hay Hotels, meanwhile, had a closing round of 85 and 367 total to secure the Seniors Fil A by beating Hotel Bahia by 16, while Robros – JV Golf Team 1 took third place after aggregating 327 including an 82 point finale.

Former Baguio mayor and congressman Mauricio Domogan closed with a 28 to lead his team the Baguio Blue Bloods to 102 and 344 total for an 18 point victory in Seniors Am A. Romeo Aquino, Rudy Lockey
and former Mankayan, Benguet mayor Materno Luspian counted for the team with 27, 26 and 21 points, in that order. CJH Team 1 cruised to a 64 point win in Fil B after a closing round of 94 and 420 total. Co-host BCC 1 settled for second place with 354 after an 81, while Filgolfers of Hawaii Team 1 had an 84 and 337 total for third place.

BCC 2 completed domination of the Seniors Am D after a closing round of 92 and 319 total for a 34 point victory over Davao Eaglemasters II which made 85 and 285 to move past Solid North Transit which had a penalty deducted two points on the last day and 281. Nueva Ecija Travellers had 61 for 266 total to win the Fil F crown. Edcore finished second with 258 after a round four 61, while Team Banh MI had a 60 and
253 total for third place. Razcals Winaca had 73 points for a 290 total for a 10 point victory on Team Foretee in Am F.

Actually Foretee was at third spot leading to the final round but outshot Jasper 74 to 69 for the four point edge. Maharlika Roast Beef slowed down in the final round scoring a measly 52 for a 247 tally to win by just four points on Ismael CPA which had a closing round of 67 and 243 total. NBI Team 157 – Reg took
third place with 217 after a 37. Regular competition starts this weekend with Manila Southwoods defending in the regular Fil and Am Championships. 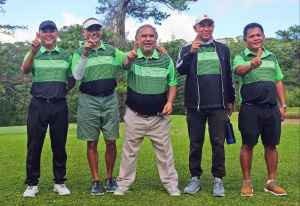