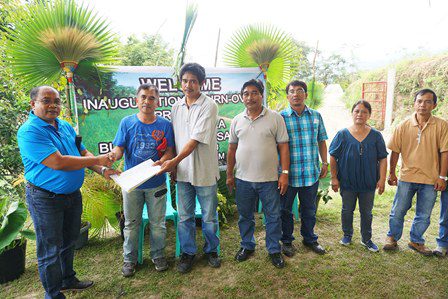 SABLAN, BENGUET – The National Irrigation Administration (NIA)-Cordillera recently turned over the Bulala Communal Irrigation System (CIS) to farmer irrigators here.
Engineer Benito Espique, acting regional director of   NIA-CAR, led other officials from the province and region’s line agencies in the simple inauguration and turn-over ceremonies held at Sitio Bulala, Barangay Bayabas, one of the remotest areas of this town.
Espique, who underscored the impact of the project, congratulated the farmer irrigators for their active involvement during the construction of the irrigation system.
The senior NIA official urged the beneficiaries to properly maintain the irrigation facility and also the source of water even as he vowed that NIA will sustain its support to farmers.
Ricardo Ciano, president of Bulala Sablan Irrigators and Farmers Association Inc., who accepted the completed Bulala communal irrigation system expressed his gratitude to the government for addressing their needs. Their association will be responsible in the operation and maintenance of the irrigation system.
The Bulala CIS, which serves 20 farmer irrigator members and covers 15 hectares, is one of two sectors in the communal irrigation system of Barangay Bayabas.
The Bayabas CIS has a total project cost of P5million funded by the Comprehensive Agrarian Reform Program (CARP).
Maribel Saley of the NIA-CAR Engineering Section said the Bulala CIS has five reservoir tanks and 4.32 kilometers of pipelines starting from their water source, Ubbog Spring.
One of the beneficiaries, Marcelino Garoy, a farmer in the area and board member of the Bulala Irrigators group, said with the improved irrigation system he is optimistic that he and his fellow farmers will have two croppings in a year.
The inauguration and turn over ceremony was   witnessed by Sablan Vice Mayor Manuel Munar Jr., Joseph Galwa-ey, who represented Governor Crescencio Pacalso, Eugenio Cales of the Department of Agrarian Reform (DAR)-Benguet, Teofilo Anacioco, barangay chairman of Bayabas and other NIA-CAR officials.
Earlier (Feb 28), the completed Calamay Sector of the Bayabas CIS was turned over to the Calamay Irrigators and Farmers Association.
The Calamay Sector with water source from the Ambingel Creek has five reservoir tanks and 5.18 kilometers high density polyethylene pipelines. It will be operated and maintained by the Calamay irrigators association which has 34 beneficiaries with a total aggregate service area of 35 hectares. PRIMO AGATEP, PNA / ABN