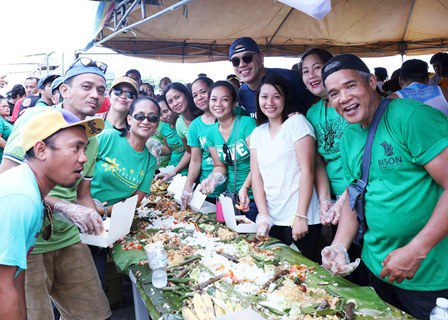 Ending September with a bang, the Provincial Government of La Union (PGLU) led by Gov. Francisco Emmanuel R. Ortega III celebrated a fun-filled Family Day under the sun on September 29, 2017 at Urbiztondo beach, San Juan, La Union.
Vice Governor Aureo Augusto Q. Nisce delivered the welcoming remarks. He put emphasis on the need to take breaks away from work to recharge in order to get back to public service revitalized. The vice governor also participated in the Fun Run that spanned the beach area along Urbiztondo.
In the spirit of building camaraderie and love in the PGLU family, Pacoy gave out a lively “Boodle Fight!” shout to mark the start of the feast at lunch time. While exchanging friendly conversations with his fellow attendees, he made sure to have a taste of all the prepared food by the different offices under the PGLU as he went from table to table.
The Office of the Provincial Governor (OPG) Chief of Staff Geraldine Joy R. Ortega and the Human Resource Management Division (OPG-HRMD) led by Ma. Theresa C. Feraren facilitated the activity-packed celebration. Aside from the Fun Run, among the highlights were the Bikeathon, Sand Sculpture Contest, Videoke Challenge, and a Taichi and Qi Gong session to help the attendees to relax and recover.
The PGLU personnel who rendered at least 10 years of service for the province were also honored with loyalty awards and recognition. The month long basketball tournament for PGLU employees also culminated on the Family Day celebration as the Office of the Provincial Governor (OPG) Team were crowned as champions. Marcel A. Florentino, PITO-La Union / ABN