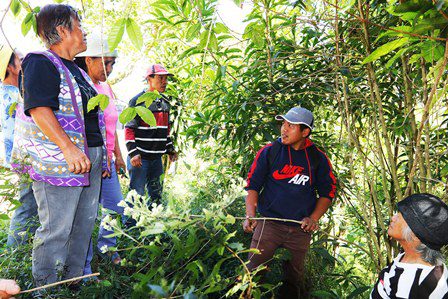 TUBA, BENGUET – Philex Group Foundation Inc. (PGFI), the corporate social responsibility arm of Philex Mining Corp., has enabled the “knowledge transfer” between its farmer-beneficiaries engaged in organic-coffee farming, helping the latter improve their production capacity as well as saving funds for the company.
“Our country needs more coffee growers to sustain the coffee industry and coffee lovers,” Paul Buenconsejo, executive director of PGFI, told the 11 farmers who gathered Wednesday, Feb. 21, at a workshop in this town’s Sitio Ligay, Brgy. Camp 1. “That’s why we’re here to share the knowledge and skills of our two farmer-trainers.”
Stressing the foundation’s successful program on transferring of knowledge from one part of the organization to another, or what is known as knowledge transfer in organizational theory, he added, “Trainers are no longer hired consultants—which costs us so much—as there are already capacitated farmers in the community who can train those who are interested to engage in coffee production, with organic-vegetable farming as cash crops.”
Funded by the Metrobank Foundation Inc., the workshop, dubbed “On-site Training on Coffee Farm Rehabilitation and Processing,” was facilitated by Osmundo Sabelo and Charwel Olo-an, who are farmer-beneficiaries themselves and had earlier trained and learned from the organic-farming experts hired by PGFI.
With an average of 1,500 shrubs of Arabica coffee that each of the 11 farmers in Sitio Ligay own and tend to, the PGFI now has a total of 22,500 plants of Arabica coffee as its source, including the 6,000 plants belonging to coffee growers in Tuba’s Sitio Torre, Brgy. Camp 3, and in Itogon town’s Sitio Sta. Fe, Brgy. Ampucao.
“Going into organic farming was a difficult decision for me to sustain, but my willingness to help our planet and also to realize my dream of producing healthy crops pushed me to continue improving our organic farm,” said Olo-an, a 28-year-old agroforestry graduate and synthetic farmer-turned-organic farming enthusiast, who tends a family farm together with his father.
He and Sabelo taught their fellow farmers, among other things, the wet-process technique, which requires the use of specific equipment and substantial quantities of water in taking care of their coffee plants. This also requires the berries to first be sorted out by immersion in water—as against drying them under the sun right after harvest—where bad or unripe fruit will float and the good ones will sink. The initial process also includes a machine removing the skin of a berry by pressing it in water through a screen.
The trainers also taught the 11 farmers some other tips on how to rejuvenate their plants—the proper ways of pruning, trimming, and nourishing—and how to make organic fertilizer, so they can harvest more coffee berries.
Buenconsejo said the foundation is looking to expand into areas where coffee beans can be produced according to taste. In Sitio Torre, for instance, there is a brand named Torre Coffee, which, he revealed, tastes “fruity,” while the one found in Sitio Sta. Fe tastes “chocolate-y.” But he added, “The produce of these two areas are very minimal, it cannot sustain the demand of our buyers.”
He said his team is prepared to look for more distributors once its farmer-beneficiaries increase their yield. PGFI now has 10 major distributors of its roasted and ground coffee beans, as compared to eight in 2016, the latest addition of which are the Ideal Space Foundation and the Ryokudo Eco-Services and Trading, Inc. It wants to improve on the number of its distributors of organic vegetables, however, as it has seven only now as compared to eight in 2016. PR / ABN