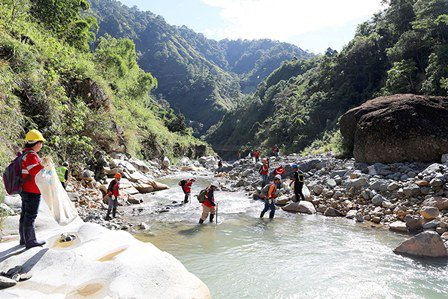 TUBA, BENGUET – Supporting the government’s celebration of September as the National Cleanup Month, Padcal mine has cleaned up a river at its mine camp that it also “adopted” as part of its environmental-protection program, with officials and employees collecting rubbish from the riverbed and planting bamboos along the riverbanks.
About 90 personnel from Padcal mine’s 15 departments participated in the cleanup of and planting of 200 seedlings of tinik, bayog, and giant bamboos at the Sal-angan River, in Itogon’s Brgy. Ampucao, on Saturday, Sept. 16. Itogon and Tuba are the host towns of the company’s gold-and-copper operations in this province.
“That’s how we do things around here – always bring any environmental-protection project or an event a notch higher,” said Eduardo Aratas, manager of Padcal’s Legal Division, who participated in the cleanup and tree-planting drive, which was also part of the government’s International Coastal Cleanup Weekend Celebration. “Not only did we rid the river of rubbish, but also plant trees.”
In a Sept. 11 letter to Manuel Agcaoili, SVP at Philex Mining and resident manager of Padcal, the Environmental Management Bureau (EMB) of Cordillera Administrative Region in Baguio City said, “We would like to request your participation in the Orchestrated Cleanup in the region of rivers, creeks, and waterways. Please participate in the cleanup of your respective adopted waterbody…”
Julius Bayogan, manager of Padcal’s Environmental Quality, Monitoring and Evaluation Dept. (EQMED), said the cleanup of Sal-angan River and other waterways at the mine camp has been a regular activity for Philex Mining, which has been in the forefront of environmental protection and community development over the past more than six decades of practicing responsible mining conscientiously.
He said the 90 Padcal personnel had collected 15 sacks of rubbish from the riverbed, eight sacks of which were residual wastes, four sacks of plastic bottles, two sacks of tin cans, one sack of various rubber items like slippers, hoses, and boots.
“Those items that were recyclable have been donated to the residents in nearby villages, while the residual wastes had been brought to our sanitary landfill at the decommissioned and rehabilitated TSF2, or Tailings Storage Facility No. 2, also in Brgy. Ampucao,” added Bayogan, who led the four-hour cleanup of the 2-kilometer Sal-angan River.
He explained that residual wastes include what remains of agricultural, industrial, and mining materials after a treatment process, as well as household trash that cannot be reused or recycled.
On Sept. 19, 2016, Bayogan also led the general cleanup of the Sal-angan River—Padcal’s water source for its mill operation—where the volunteers collected 465 kilograms of waste, 382.5kg. of which were residual, 45kg. were biodegradable, and 37.5kg. were recyclable.
He said the Sal-angan River was “adopted” years ago by Philex Mining to be part of its cleanup drive of waterways and other surroundings at the mine camp.
Last year’s event was also in line with President Rodrigo Duterte’s “Bayan Ko, Linis Ko”, which promoted cleanliness in coastal and inland waterways, creeks, public places, and private establishments nationwide. PR / ABN