Manila Southwoods is on track of retaining its titles when their first and second teams Thursday widened their leads in the Fil and Am Championships halfway in the 72nd Fil-Am Invitational Golf Tournament at the Camp John Hay and Baguio Country Club courses. Jae Hyung Jun shot a second straight one under 68 for 37 points, even as Carl Corpus and Gabriel Manotoc slowed down at the CJH golf course as Manila Southwoods settled for a six over for 138 points for a two day total of 286 points before shifting to the short and tricky BCC layout Saturday.

Jae submitted four birdies against three bogeys to conjure the only sub-par performance in the six team Fil Championship flight to banner Southwoods’ title retention bid. Kristoffer Arevalo after failing to count on first day had a one over for 35 points, while Corpus and Manotoc had identical 33s. Aidric Chan did not count this time with his 29. Augusto Pacheco had an even par for 36 points to lead one time champion Forest Hill
to 134 and a halfway total of 263, 23 points off the leader. Edison Tabalin had 34, while Rocky Co and Jose Inigo Raymundo chipped in a pair of 32s to count for the team.

Januarius Golf Team 1 had 32s from Ray Sangil and Terence Macatangay, while Ryan Rizada and Ronald
Lachica added 31 and 29, respectively, for the team’s 124 and 245 total and carry a two shot lead on SPES Team 1 which made 127 and 243 aggregate. Time Cargo Logistics Team 1 is at fifth spot with 228 after a 118, while X1R Tipsypig Mizuno Team 1 carded a 119 for 226 points for sixth and last spot. Southwoods team B got a one over for 35 points at the BCC fairways to lead the defending champion to 119 for 238 and widen its lead to 33 points leading to the kinder layout of CJH on Saturday.

Lanz Uy made 34, while Shinichi Suzuki and Masaichi Otake added 25 each to count. Leandro Bagtas did not count for the team after a 20. Royal Northwoods assembled 102 points for 205 total on the 29 of Zachary Villaroman, 28 from Patrick Tamblaque, 26 from Tristan Padilla and 19 from Alexander Crisostomo. Riviera Batangas Barako is at third spot with 190 after a 95, four off Valley Golf after a 96. Team Surigao Norcal and Leeward Fil-Am of Hawaii are at fifth and sixth spots with 174 and 158, respectively.

Meanwhile, Kumpadres improved to 104 and with its first day 103 gives the local squad a two day aggregate of 207 for a 23 point lead in Fil C. Ramir Badua and Ramir Rosito paced the squad with dimilar 27, Dai Tsuchiya added 26 and Jeremiah Guanso chipped in 24 to count for the team. Fil- Am League Golfers of Chicago made 93 for a 183 total and second spot while Ultraflite Golf Club 1 is at third spot with
166 after an 81. Danny Wong scored 22 points, while John Marasigan and Mar Bustos submitted an
identical 20 and Manny Solis added 17 as CJH 2 tallied 152 to catch first round leader Kumpadres in Am C.

It was a mighty jump for the co-host team which moved up from fourth spot even Kumpadres could only manage 70 for a similar two day tally. Lurking two shot down at 150 is Green Jacket which shot 71. BCC 2 fell to fourth from second spot after a 66 and 145 tally. The Championship flights will take a break Friday to return Saturday at the BCC course for the Fil flight and CJH for the Am squads. 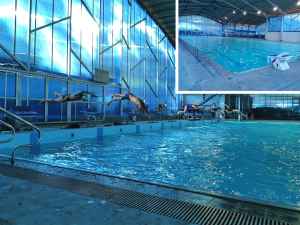 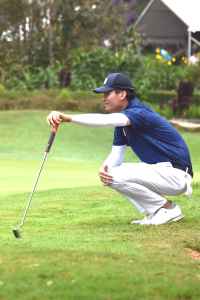