The Municipal Local Government of Aguinaldo, Ifugao officially broke ground on its new PhP246.31 million farm-tomarket road (FMR) rehabilitation project at a ceremony held on October 27, 2022, at Potagon, Ubao, Aguinaldo, Ifugao. The 8.397-kilometer improvement of Ubao-Manaot FMR, which covers barangays Ubao and Monggayang, is expected to benefit around 446 households within its influence
area.

It is the first subproject of the Municipality of Aguinaldo under the Department of Agriculture’s Philippine Rural Development Project (DAPRDP). The groundbreaking ceremony was led by Ifugao Congressman Atty. Solomon R. Chungalao, Aguinaldo Mayor Gaspar B. Chilagan Jr., DACAR Regional Executive
Director Cameron P. Odsey, and 3W Builders, Inc. representative Ramon Blackera. Subproject beneficiaries, DACAR staff, and several LGU officials and heads of offices from the provincial and
municipal local government of Ifugao were also present to witness the event.

During the Program, Congressman Atty. Chungalao advised everyone involved especially the contractor, the MLGU and the beneficiaries, to help each other and do their best in the implementation of the road project so that it will be completed in quality. Mayor Chilagan also expressed that the FMR subproject is a historic project because of the sacrifices, efforts, and cooperation that were rooted in pursuit of it.

“This is the biggest project from the national government that was given to this municipality through the DAPRDP, and your full support is needed in this pursuit,” said Mayor Chilagan, adding that the FMR project will propel their municipality to progress. Meanwhile, Director Odsey commended the collective support given by all leaders, officials, and the community towards the approval and implementation of
the FMR subproject.

“From start to finish, the community, officials, contractor, and the DA will help each other to watch over this project so it will be completed in good quality which will soon contribute not only to the development of the agriculture industry but the locality as a whole,” the Director said. Once the FMR is approved, it will not only benefit commuters from the influence area but will also serve as an alternate route to and from the
nearby municipalities, including Alfonso Lista, Ifugao and Paracelis, Mountain Province. 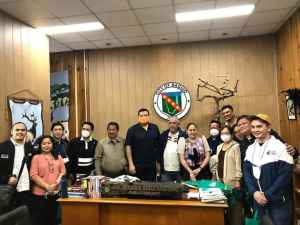