Despite the issue on its batching plant at Sitio Monglo, Barangay Bayabas, Sablan, Phesco Inc./
Silverwolves Construction Corp. remain committed to complete its circumferential road project.
“Construction of road project is going on ,” Engr. Robertson Bulan of Phesco Inc. said. Bulan added that the present number of workers of its circumferential road project is being managed efficiently, clarifying reports for lack of manpower working at the project site.

In a telephone interview, Ismael De La Cruz of the Department of Public Work and Highways -Cordillera and the project engineer, described “minimal” the current accomplishment by the contractor since the issue of batching plant surfaced and was ordered closed. In recent dialogue, the DPWH official, reported that Phesco Inc’s project accomplishment actually posted at 60 percent. Silverwolves Construction Corp contractor of the P286- Million (3.6-kilometer) circumferential road project in Sablan, maintained that a
batching plant is critical to the delivery of concrete materials for the completion of the said project.

PHESCO INC.’S BATCHING PLANT ISSUE In a telephone interview, Sablan Mayor Alfredo Dacumos, Jr.
told ABN that villagers of Barangay Bayabas have “selected” the lot being offered by a certain Remedios
Advincula as the proposed new site -batching plant. Dacumos said it was the result of joint meeting and a visit on the proposed plant site by concerned government agencies that include Cordillera Regional Development Council, NEDA-CAR, Sablan LGU and representative from Phesco Inc.

As this developed, and based on the document obtained, on October 13, 2022, Teofilo Anacioco, Punong
Barangay wrote Phesco Inc.through Engr. Robertson Bulan, Operation Manager -BLISST Circumferential Project, stating that it can now proceed in negotiating with Mrs Remedios Advincula for the proposed
relocation site of its batching facility.

In an exclusive interview, Bulan said his company will still have to conduct an engineering assessment if the area (Advincula) is feasible for batching plant operation. Other development, an unimpeachable source claimed that Barangay Bayabas Chairman Anacioco is related to the Advincula’s who are offering their lot for the proposed new site of the batching plant. 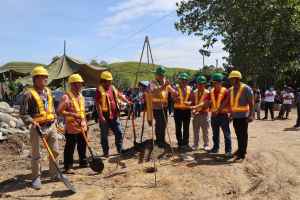