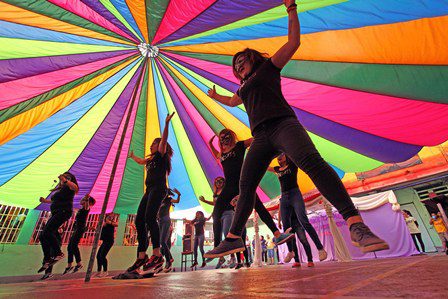 BAGUIO CITY – In support to the National Women’s Month Celebration (NWMC) the Baguio City Jail Female Dorm (BCJFD) launched on Tuesday (March 6) their own version of celebrating the month dedicated to all women.
The National Women’s Month Celebration every March is part of the worldwide observance of the International Women’s Day (March 8) which aimed to give due recognition to the contributions of the Filipino women in the development of the society.
Jail Senior Inspector April Rose Ayangwa said that aside from complying with the directive from the Philippine Commission on Women (PCW) to conduct activities empowering women, they are also celebrating the month to boost the self esteem of the inmates. She said some inmates feel depressed and developed low self esteem since living inside the facility.
“As part of their empowerment in accordance to the theme “We make change work for women”, we want them to win back their self confidence because some of them have already lost it. And one of our main activities during the month-long celebration is the seminar on ways to address depression, anxiety and other mental disorder on March 26 which, I’m sure, will boost their low self-esteem,” Ayangwa said.
During the launching, the female dorm inmates competed in the cheerdance competition intended to improve their physical fitness. The inmates also competed for the most creative booth and livelihood product display during the opening. Guests from the local government unit of Baguio including the different government agencies served as judges during the competition.
Not known to the inmates, their cells (rooms) were also inspected to check if they are complying with the standard under their Therapeutic Community Modality Program. “Under this program, we are not only instilling cleanliness, orderliness and discipline but also part of their therapeutic healing,” Ayangwa said.
In her speech, Councilor Lilia Fariñas, chair of committee on social services, women and urban poor, expressed her appreciation to the women inmates for achieving several awards despite being deprived from their liberty.
“It’s very unfortunate that you are inside this facility but despite that you continue to strive to become a better person and bring out your best version of your self. The evidence shows because you become a recipient of several awards despite being deprived from your liberty. I hope you continue bringing the best version of yourself,” Fariñas said.
Among the awards that BCJFD received are the Red Orchid Award (twice), Quarterly Best City Jail Implementer from 2016 to last quarter of 2017, Best New Concept Production (Anatomiya ng Babaeng Puguita), Recognition for commitment to the Pasadang Pambarangay program of the city, and Outstanding Community Relations Initiatives in reaching out to inmates’ families.
The other activities for the women’s month celebration at BCJFD includes DBM information drive (March 8); Motivational talk (March 9, 13 and 19); Zumba (March 10, 13, 17 and 24); Song writing contest (March 12); free pap smear and cervical cancer screening (March 15); BCJFD Tiange at the BJMP-car parking area (March 17-18, 24-25); skills training on book binding, T-shirt printing, essay writing, poster and slogan making contest (March 19 and 20); gift giving (March 22 and 27); and the awarding and closing ceremony on March 31. DIONISIO B. DENNIS JR. / ABN