To fully rehabilitate the 34-hectare Burnham Park Complex, the city will be needing a whopping PhP3.1 billion.

City Planning and Development Officer Arch. Donna R. Tabangin said this week during a presentation to city officials that the fund will upgrade the park that may entice more foreign and domestic visitors here and help revive the local economy that was heavily impacted by the Covid-19 pandemic.

Tabangin added that the master development plan will serve as the blueprint for future developments that will be introduced in the different areas of the park.

The development of the park will be jump-started by the P480 million funding from Tourism Infrastructure and Enterprise Zone Authority (TIEZA) that will go to the rehabilitation and upgrading of the Rose Garden, Burnham Lake and the children’s park, aside from improvements in other areas of the city’s premier tourist destination.

City administrator Bonifacio dela Pena said partial upgrading of identified portions of the Burnham Park will be done as soon as TIEZA will release the committed funding by January next year.

“We could start work immediately after the release,” said dela Pena. He added that this was delayed as the money was realigned for the country’s battle against the Covid.

The city, on the other hand, will implement several locally funded projects that include the construction of the Baguio Youth Convergence Center and Sports Complex, the put up of several parking structures, and the improvement of the Baguio tennis court. Said master development plan will be transmitted to the city council for approval.

Meanwhile, the city will also submit same development to concerned government agencies in order to avail of funding that will be used to improve the Melvin Jones football field, skating rink, Pines Trees of the World, among other areas.

Former President Gloria Macapagal Arroyo issued Executive Order No. 695 in 2008 that bestowed to the city government the full authority to administer, manage and operate the Burnham Pak complex, the national government’s gift to the city during its centennial anniversary celebration on September 1, 2009.

The city is also expected to replace the tartan track of the Baguio Athletic Bowl to conform to the prescribed international standards of track ovals to allow the city to host track and field competitions. 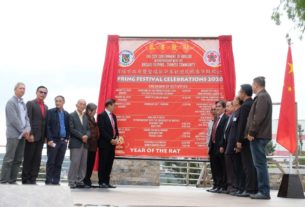