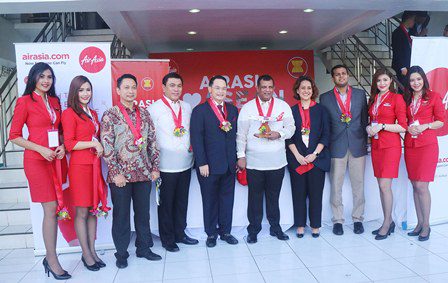 AirAsia Group Chief Executive Officer Tony Fernandes is hoping for the full development of infrastructure for the Clark international airport to boost ASEAN travel.
“The answer is Clark for the Philippines, but while waiting for that to happen, we will bengaline smaller infrastructure with the tertiary airports we have in the country.”
Fernandes said the Philippines is the best kept secret of the ASEAN and described the year as a turning point for the airline in the country.
Clark International Airport Authority is now batting to become the gateway to the North in the next five years with massive infrastructure plan to catapult the area into the next major hub for travel.
The Master Development Plan includes the building of a new Passenger Terminal with an eight million-passenger capacity being implemented by the Department of Transportation.
AirAsia launched commercial flights from Clark in March 2012 before transferring its hub to Metro Manila following a strategic partnership with a local carrier in 2013. AirAsia has since been operating on a much larger scale with additional fleet of aircraft from Metro Manila and has expanded its domestic and international network with flights from hubs in Manila, Cebu, and Kalibo.
During the [email protected] celebration, Fernandes and ASEAN ministers led by H.E. Dr. AKP Mochtan and AirAsia Philippines CEO Captain Dexter Comendador, launched “I Love ASEAN” aircraft at the Villamor Airbase on November 14.
The aircraft showcased designs inspired by textiles of the 10 ASEAN nations; the batik cetak from Malaysia, poom khao bin from Thailand, ulos batak from Indonesia, tapis from the Philippines, tong dong from Vietnam, kbach chan from Cambodia, lao phouthai from Laos, chate from Myanmar, the jongsarat of Brunei and vanda miss joaquim from Singapore.
Fernandes in his speech said, “(We) are an ASEAN airline, this is a tribute to the ASEAN. We congratulate ASEAN for 50 years of peace and now look forward to 50 years of economic growth.”
“I urge people of Asia to support the vision of One ASEAN. We owe our success to ASEAN,” he said.
“As a truly ASEAN airline, we want to bring the people across the region closer together in line with the amazing work ASEAN has done over the past 50 years,” Fernandes said.
He said, AirAsia Loves ASEAN is just the first of many initiatives to give back to the region that, with the continued promotion of ASEAN destinations through the branding and marketing efforts, will be able to help bridge communities and economies as ASEAN moves towards even greater integration and mutual understanding.
The Malaysian-initiated company launched the AirAsia Loves ASEAN, a series of initiatives focused on education, talent development and the economy to celebrate 50 years of the ASEAN.
The initiatives comprise the AirAsia ASEAN University Partnership, ASEAN Entrepreneurs Day, ASEAN Journalists Camp and Allstars Exchange Programme.
Through the university partnership, AirAsia will give tertiary students from across the region the opportunity to intern in various capacities with the airline, with a chance to secure full-time employment upon graduation. ZALDY COMANDA / ABN