BAGUIO CITY – The local office of the Commission on Elections (Comelec) confirmed there has been apparent vote buying activities being done by aspiring elected local officials in the city over the past several months and it is constrained to launch a multisectoral anti-vote buying campaign in the city right after the filing of the certificates of
candidacy (COCs) on October 17, 218.

City Election Officer Atty. John Paul Martin said that the unrelenting and uncompromising anti-vote buying campaign will involve multi-stakeholders to instill vigilance among the city’s electorate on the prevalence of
massive vote buying activities that will affect the credibility of the upcoming May 219 midterm elections.

He pointed out the campaign will focus on the education of voters on the various modes of direct and indirect vote-buying activities employed by individuals aspiring for elected positions in the upcoming elections such as the distribution of money, rice, water, candies, ketchup, among other items, to influence the voters to vote for candidates
distributing such items.

Aside from voters education, Martin explained the campaign will also entail legal assistance where forms will be made available to the public to fill up for complaints of vote buying with the attached pieces of evidence for the appreciation of the poll body’s investigating team.

“We want to instill awareness to our voters on the various types of vote buying activities being done by our politicians so that they will be empowered to file the necessary complaints against those politicians and their supporters who resort to vote-buying just to ensure their victory in the forthcoming elections,” Martin stressed.

The Comelec official underscored it is also important for the poll body to secure the commitment of the candidates in the anti-vote buying campaign that they will not resort to vote-buying during the election period which might tarnish the integrity and credibility of the election results.

According to him, there were previous reports on alleged vote buying activities already being done by some aspirants for elected positions but what the poll body is doing now is empowering the complainants to support their allegations with pieces of evidence such as videos, photographs among other acceptable evidence, which will warrant the eventual conviction of the involved parties.

He underscored that there had been a successful case on vote buying upheld by the Supreme Court wherein for giving an egg, the involved party was tried and convicted for vote buying.

Martin expressed optimism that the anti-vote buying campaign will be successful in the city which will pilot the
project and will serve as a template for future anti-vote buying initiatives to curb the proliferation of vote-buying that casts doubt on the results of the conduct of the political exercise.

He extended the invitation to all the interested sectors to signify their intention to join the anti-vote buying campaign to strengthen already established efforts for honest, orderly and peaceful elections. BAGUIO PIO / ABN 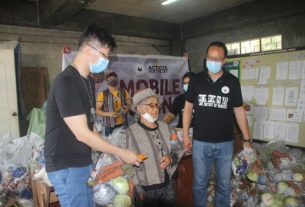