BAGUIO CITY – Fearing they wil be displaced, residents at Purok Ongasan, Loakan have sought the help of the City Government of Baguio regarding the plan of the Philippine Military Academy (PMA) to construct a perimeter fence.

The local legislative body, during its regular session last Monday, passed a resolution calling on PMA to discontinue its perimeter fencing project at Purok Ongasan, Loakan which affects some 150 families.

Reynaldo Calaycay, President of the Bontoc Organization of Purok Ongasan Loakan Inc., appealed for the stoppage of the said development as it will enclose the lot occupied by the residents.

The concrete fence to be built will block the ingress and egress of the residents and will eventually displace them from their homes. The lot in question is covered by Proclamation No. 2405, Series of 1985 which declared certain portions of land of the public domain situated in Fort Gregorio Del Pilar as a military reservation subject to private rights, if any there be.

Calaycay claimed the said area had been occupied by their forefathers since World War II and prior to the establishment of PMA. He said the organization tried reaching out to PMA for a dialogue several times but the latter never replied to their request.

Furthermore, they have been seeking the help of the city government for the segregation of their lot from the operation of Proclamation No. 2405.

The members and officers of the Bontoc Organization of Purok Ongasan Loakan Inc. requested for the conduct of a segregation survey of the said parcel of land.

In 2017, the Pre-Proclamation Committee chaired by the Housing and Urban Development Coordinating Council (HUDCC) favorably recommended the segregation of the lot and the issuance of a presidential proclamation covering the said lot for housing purposes.

The Department of Environment and Natural Resources Cordillera Administrative Region (DENRCAR) granted a survey authority for the conduct of a segregation survey over the area.

Subsequently, a segregation plan for the said area was prepared and issued by the Land Management Services of the DENR-CAR. In 2020, the city council passed a resolution approving the said segregation survey.

Councilor Fred Bagbagen, chairperson of the city council’s Committee on Urban Planning, Lands, and Housing, said the city government must urgently act on the matter in favor of the residents.

Bagbagen further stressed that the impending displacement of the residents without due process is a violation of the citizens’ constitutional rights. Representatives of PMA failed to attend the forum, thus were invited once again in next Monday’s regular session to explain their side of the story.

Journal corres falls to COVID, goes home in a jar 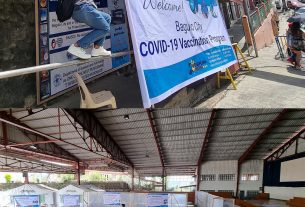