The Department of Health (DOH) – Ilocos Region together with the provincial government of
Pangasinan led by Regional Director Paula Paz M. Sydiongco and Governor Ramon V. Guico III marked the start of the “2022 Iwas Paputok – Ligtas Christmas sa Healthy Pilipinas Campaign” activities at the Provincial Capitol Grounds yesterday, December 19, 2022. To boost the campaign,
elementary school children joined the activity by blowing the traditional trumpet (torotot) to promote the use of alternative noisemakers to celebrate Christmas and welcome the New Year safely.

Filipinos are known to be naturally creative and innovative kaya marami talagang magagamit at
huwag ng bumili pa ng illegal na paputok. Isa pa, we can save a lot of money by not spending in any kind of firecrackers or fireworks,” she emphasized. The regional office also launched its search for the “Pinaka-Bonggang Merry Making Alternative Sa Paputok” contest which is open to all Pangasinan Provincial Government employees.

Participants who wish to join the contest will only send a video of their most impressive noisemakers using recycled materials and send it to the regional office. Winners will be announced on Friday, December 23, 2022. Pangasinan Governor Guico III, on the other hand, expressed his appreciation for selecting Pangasinan as the launching site for the campaign. “We support the
DOH’s campaign to prevent injuries caused by illegal fireworks that is why we will be on high alert during the yuletide season, especially our PNP.

“Ang mensahe po ng ating Kagawaran ng Kalusugan ay huwag magpaputok pero magpaturok,” Guico stressed referring to the on-going Covid-19 vaccination which placed Ilocos region as second
with the most number of target individuals vaccinated. According to the Regional Epidemiology and Surveillance Unit (RESU), Pangasinan recorded a total of 39 fireworks related injury from the period of December 21, 2021 to January 3, 2022 which is 15% higher compared to the same period of December 21, 2020 to Januany 3, 2021 which is 34.

Baka mamaya ay tayo o miyembro pa ng ating pamilya ang madisgrasya nito.” He also said that the PNP is serious in implementing the law against the sale and manufacture of illegal fireworks and stated the members of police force will be deployed during the holiday season to provide safety and security to residents. A motorcade was also conducted together with various regional and provincial
government agencies including the Philippine National Police (PNP), the Bureau of Fire Protection (BFP), Department of Trade and Industry (DTI), Department of Education (DepEd) Department of Health (DOH), All heads of government agencies present during the activity signed a pledge of commitment to implement and support the Iwas Paputok Campaign 2022. 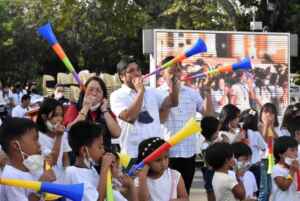