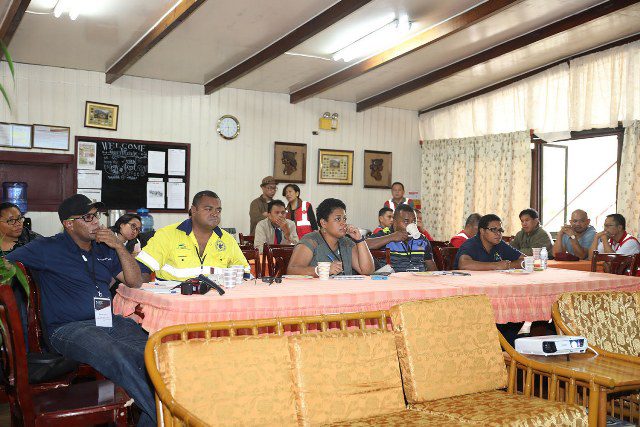 TUBA, BENGUET – The rehabilitation works that Philex Mining Corp. has done to its decommissioned and active tailings ponds have wowed officials from Australia’s Minerals and Energy for Development Alliance (MEfDA) as well as a multistakeholder team from Fiji, saying they were “impressed” and have obtained fresh knowledge from their tour of Padcal mine.
“We are very impressed with the presentations, and the things we saw here gave us a lot of ideas…” Marika Ritova, manager of Mining Division at Australia’s Minerals Resources Dept. (MRD), said. “Surely, when we go home to face the challenge in our place, we will use these ideas, concepts, and practices that we have learned from this tour.”
Ritova, two other delegates from Australia, and a six-man team from Fiji visited Thursday, Sept. 14, Philex Mining’s gold-and-copper operations in the municipalities of Tuba and Itogon, where they witnessed the community-development and environmental-protection programs being implemented by the company, including its rehabilitated Tailings Storage Facilities (TSFs) 1 and 2.
A partnership between the University of Western Australia, in Perth, and the University of Queensland, in Brisbane, MEfDA is tasked to “help resource-rich emerging economies transform their mineral wealth into inclusive sustainable socio-economic development,” according to the Economic Section of the Australian Embassy, in Manila.
“The Philippines is a resource-rich economy with leading practices, regulations and standards on managing the extractive sector,” the embassy said in its Aug. 23 letter to the Mines and Geosciences Bureau (MGB), whose regional office in Baguio City facilitated the nine-man delegation’s visit to Padcal mine. It added that the team was “interested to learn about mined land rehabilitation.”
Accompanied by some of the regional officials of MGB, a government agency tasked to regulate the mining industry and functions under the Department of Environment and Natural Resources (DENR), the delegation visited TSFs 1 and 2, both in Itogon’s Brgy. Ampucao, and the Saint Louis High School – Philex and the Sto. Niño Hospital, both in Tuba’s Sitio Padcal, Brgy. Camp 3.
In a briefing done at the Philex Guest House, in Sitio Padcal, Philex Mining officials took turns in presenting before the delegation the company’s social programs and reforestation projects that have been implemented in its host and neighboring villages over the past more than 60 years of conscientious and responsible mining.
The main focus of the presentations and discussions, however, were the integrity of Padcal’s TSF3, in Brgy. Ampucao’s Sitio Balog, as well as the decommissioned and rehabilitated TSF2, which is now being used for the company’s waste management program, and TSF1, which has since been reforested with the different species of trees, fruit trees, tropical plants, and bamboo.
Philex Mining officials also thanked the delegates for having chosen the company as part of their study tour in the Philippines. “We are honored that you have come,” Victor Francisco, VP for Environment and Community Relations (ComRel), said during the briefing. “We believe that mining can done in a better way, and that the success of a mining company is dependent on how it is regulated.”
Besides assuring the delegates that Padcal’s operating TSF3 can handle the volume of rainwater more than what the worst typhoons had caused, Philex Mining officials also said the tailings pond could withstand earthquakes equivalent to the strongest that have hit the Philippines.
TSF3’s open spillway, which replaced its underground drainage system since August 2013, was built with the embankment-design parameters based on ANCOLD and ICOLD guidelines, and could handle the amount of rainwater more than what Tropical Storm Ondoy, in 2009, as well as Typhoons Ferdie and Gener, in 2012, had caused.
According to Philippine government regulations, an open spillway must be able to withstand a flood event having an unusual rainfall with a 1-percent chance of occurring at any given time.
This unusual rainfall, as far as TSF3 is concerned, would be equivalent to 1,000 millimeters (mm) in 24 hours. With its three chutes each measuring 12-meter wide and 300-meter long, Padcal’s open spillway can channel up to 1,500 mm of rainwater that “Ondoy” dumped over a 24-hour period.
Both the ANCOLD, which stands for Australian National Committee on Large Dams, and the ICOLD, or International Commission on Large Dams, an NGO founded in Paris, provide guidelines in the building of dams that are safe, economical, and environmentally and socially sustainable. These are vital to achieving excellence for all aspects of dam engineering, management, and related issues.
Besides Philex Mining, the delegation from Australia and Fiji, an archipelagic country in the South Pacific with more than 300 islands, have been scheduled to visit two other extractive companies here in the Philippines between Sept. 11 and 19.
The delegates from Fiji included Sereima Koli, senior scientific officer of Environment Division, MRD; the division’s community liaison officer, Noa Kurunalagi Tuiloma; Jona Sevura, a consultant of the Naibulu Mine Landowners; Sakiusa Waqanisau, senior technical officer of MRD; Adi Tindara Maramasoli Tamanikaiverata Sukani, senior research officer, Taukei Land Trust Board; and Livai Nadore, environmental officer, Dept. of Environment. Muza Gondwe, PhD, served as their tour facilitator from MEfDA. PR / ABN