A friend of mine and a former colleague in the S a n g g u n i a n g Panlungsod (City Council), Marvin Binay-an, came up with a comment in relation to those who often have critical opinions against the city government of Baguio posted in social media such as Facebook.

In his comment, also posted on Facebook, he suggested that those who rail against the city government for the supposed faults or inaction of the latter should also try participating or attending barangay activities, such as barangay assemblies in their respective communities so that they will be able to better appreciate the efforts being done by the local government.

I totally and absolutely agree with what Marvin said in his post on Facebook. Even before anyone can have the gall and temerity to question the action done by a local government unit, they must show proofs that they are active participants or collaborators within their respective barangays.

In that way can they be sure of what they are griping about and not just question government action from afar. Republic Act 7160 otherwise known as the Local Government Code of 1991 is the bible of all local government units in the country, including the barangays.

In that local law, it is explicitly stated in Section 384 thereof respecting the role and creation of the barangay- that, “As the basic political unit, the barangay serves as the primary planning and implementing unit of government policies, plans, programs, projects, and activities in the community, and as a forum wherein the collective views of the people may be expressed, crystallized and considered, and where disputes may be amicably settled.”

From the above provision of RA 7160, we find that the barangay plays a vital role in the overall development of a local community and we can even post that without these barangays which operate in the grassroots, no government, both local and national, will ever succeed with its policies, plans, programs, projects and activities.

The barangays, or more particularly the barangay officials and their supporters and volunteers, work 24/7 to bring and deliver the basic services needed by their constituencies.

To illustrate the indispensable role played by the barangay in local governance, anybody who would happen to visit a modern multi-purpose barangay hall would discover that it will have a barangay office manned and supervised not only by the Punong Barangay and his kagawads but an Officer of the Day who attends to the concerns brought to the attention of the barangay.

Also, a modern barangay hall would usually have a day care worker manning a day care center which provides supervision and care of infants and young children during daytime so that the parents of these children can hold day-jobs.

Not only that, we will also find that the multi-function role of the barangay includes taking care of the peace and order in the community by assisting the police, maintaining sanitation and cleanliness of their territorial jurisdiction, attending to the general well-being of their constituents and serving as the front-lines of the government in the grassroots level.

So before you can even begin to assail the government for its alleged failure to govern its people, participate and collaborate in your barangay to better appreciate what governance is all about. 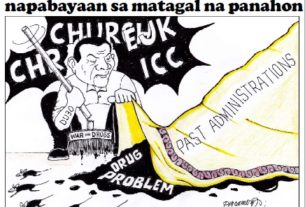 Wearing of IDs in food and night establishments proposed