On Tuesday, House Bill No. 10026 strengthening the field offices of the Commission on Elections by upgrading and creating certain positions, which was filed by Congressman Eric Yap was approved in the Committee on Appropriations of the House of Representatives.

The panel approved the un-numbered substitute bill which will consolidate all bills related to this measure and is hoped to hurdle the plenary deliberations despite failing to do so in previous Congresses.

This measure intends to strengthen the COMELEC field offices by reclassifying, upgrading, and creating positions, amending for the purpose Section 53 of Batas Pambansa 881, or the Omnibus Election Code, as amended.

“Noong 14th Congress pa yata ito isinusulong, and admittedly, I wasn’t aware of their plight until I myself heard of it through dialogues and meetings with the field personnel. Its about time, this is long overdue,” he added.

Despite the ongoing budget deliberations at the plenary of the House of Representatives, the Appropriations panel chaired by the Benguet Congressman ensured its passage in the Committee.

“Like I said, this should have been approved before and I don’t see any reason why we don’t do it now. Elections are coming and their job is about to get harder with the ongoing pandemic situation, we want to give them a decent pay commensurate to their mandate of protecting the sacred right of our people to vote and participate in safeguarding our democracy,” Yap stated. 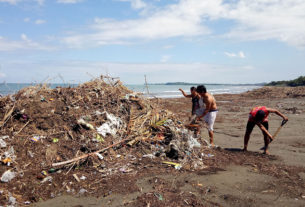 Tons of waste on the beach