About 2,000 title holders can hope for another two years to submit their manifestation to validate titles in Baguio Townsite Reservation as the House of Representatives approved on third and final reading House Bill 7455, authored by Rep. Mark Go.

The measure is granting two more years for title holders to file manifestation to validate titles issued under Civil Reservation Case No. 1, GLRO, Record No. 211, pursuant to Republic Act 931, as amended, and as provided under Presidential Decree 1271.

PD 1271 declared that certificate of titles in Baguio Townsite Reservation issued on or before July 31, 1973 shall be considered valid provided that their application for validation shall comply with the conditions and other requirements set forth in the law.  Due to the limited period provided by law, another period of six months was given under PD 1651 to file manifestation of intention to validate said titles.

“I am glad the lower chamber has considered this measure. This will give all the affected title holders another chance to validate their respective titles in order to prevent the cancellation of their original and transfer certificates of titles,” Go expressed.

Out of more than 8,500 title holders who are qualified to apply for validation, only about 6,255 validated applications were filed on the deadline provided for under PD 1651. A Special Committee was created under PD 1271 to look into certain certificates of titles of lands in Baguio City.

As of October 15, 1993, approximately 4,789 petitions were approved by the committee created under PD 1271. However, about less than 2,000 title holders still did not meet the deadline in validating their titles.

“We do not want these title owners to suffer the confiscatory effect of the law. When they fail to validate their titles, of course they are also prohibited to dispose and encumber those. More so, they will be compelled to vacate the property and remove whatever improvements they have introduced on the property. We do not want that to happen.” Go stressed.

Once enacted into law, the City Treasurer and City Assessor of Baguio City, the Register of Deeds, Baguio City, and the Land Management Bureau of the Department of Environment and Natural Resources (DENR) are directed to cause the necessary publication and personal notice to holders of such titles for the filing of their manifestation to validate their titles.

The measure was forwarded to the Senate for consideration and approval. ABN 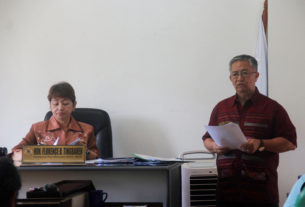